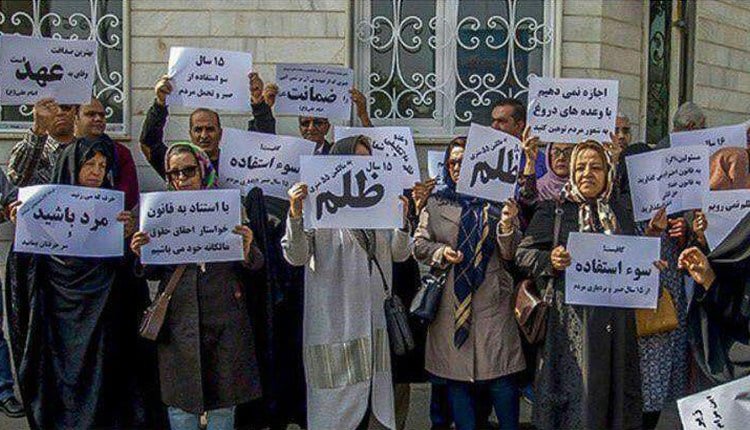 From October 20 to 23, 2018, plundered investors, housing applicants and students held a number of protests in various cities of Iran. Women’s active role was evident in these gatherings.

On Tuesday morning, October 23, 2018, a group of plundered investors of the IRGC-backed Caspian Credit Institute rallied in front of the Justice Ministry’s Official Experts League in Tehran, in protest to the unfair pricing of the depositors’ properties.

On October 22, 2018, Rasht saw women’s active role in the protest rally of defrauded investors of the Caspian Credit Institute.

At the same time, civil rights activists and residents of Vanak Village, held a protest rally in protest to the demolition of their homes and their transfer to the Azad University. Women’s active role in these gatherings was prominent.

On Saturday, October 20, 2018, residents of the 58-meter Project in Arak gathered in front of the Governorate, demanding that the project be stopped. Women played an active role in this gathering held for several days.

On Monday, October 22, 2018, non-medical PhD students gathered in front of the parliament to protest the recruitment problems faced by PhD students.

On the same day, students continued their protest for the third day against fraud in the notary tests in front of the Office for the Registration of Documents and Real Estate.

Students of Amir Kabir University of Technology in Tehran and students of the Razi University of Kermanshah organized protest rallies on October 20 and 23, respectively, against the low quality food served by their universities’ cafeteria and lined up their dishes on the floor to show their protest.

Students of the University of Shiraz also held a protest on Friday, October 19, 2018, against the university’s policy of obtaining tuition fees from students.

Young women’s active role was remarkable in all the university protests.

Since March until the end of September 2018, women have actively participated in at least 430 acts of protest by different sectors of society.

Early marriages are the worst oppression of Iranian girls