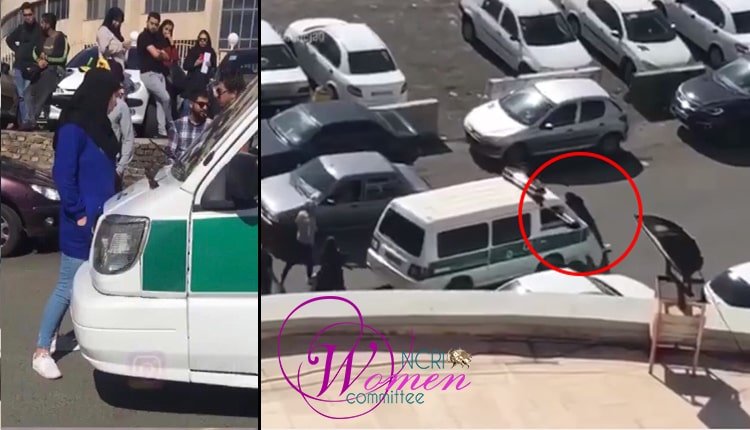 Female students of the central unit of Tehran’s Azad University confronted the Guidance Patrol forces during a protest rally on Saturday, October 27, 2018, held in the university’s surrounding area in Sohanak. Female students played an active role during the protest and tried to stop the Guidance Patrol vehicles which were driving into the crowd. Witnesses have filmed a female student being pushed by the car and posted the scene on the internet.

Female students of medical sciences of Azad Universities also gathered on Saturday, October 27, 2018, pursuant to a number of other similar protests held against the mistakes made in the 2018 admission exams.

One of the protesters said, “The Azad University has several times declared that the problems of the majority of students have been resolved, while this is a lie, and our statuses continue to remain undetermined.”

Genetics specialists held a protest rally on October 27, outside the building of the Medical System Organization in Tehran. The rally was against the organization’s failure to provide medical system numbers for the professionals.

In another protest on Saturday, retired women of various government banks converged in Tehran and held a protest rally outside the Bank Pension Fund. One of the protesters said, “One of our most important demands is the unconditional and permanent implementation of article 64 of Chapter 10 of the Law on the Administration of State Services, and payment of the salary difference since January 20, 2017.”

In another protest held on Saturday, October 27, 2018, a group of defrauded men and women cheated by the Gold Samen Website gathered outside the Public Prosecutor’s Office in Tehran.

A group of women’s rights activists gathered for a symbolic ceremony on Saturday, October 27, 2018, at the grave of Reyhaneh Jabbari and commemorated her on the fourth anniversary of her execution.