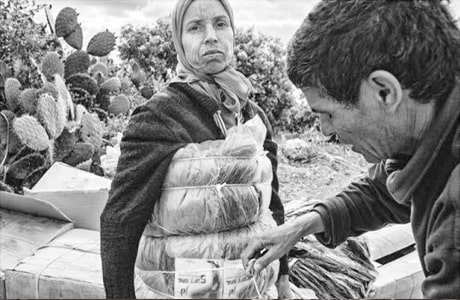 Koolbar is a term used by locals in the Kurdish region of Iran to refer to porters and people who carry goods across the border to earn their living. Koolbars are mostly at work in the Iranian provinces of West Azerbaijan, Kurdistan, Kermanshah, and Sistan and Baluchestan. Due to rampant unemployment in the country, they have found no options but to carry and bring in heavy loads of foreign goods in return for trivial wages.

Working as a koolbar is not a choice, but an obligation which is a byproduct of discrimination and oppression under the rule of the mullahs’ regime; it is a consequence of 40 years of destructive policies.

Lack of job opportunities, lack of factories and industrial plants, lack of investments in the border towns and especially in Kurdistan, and excluding these regions from national construction projects, are among the factors contributing to the growing number of people in these areas who have to resort to this literally back-breaking job.

The government’s failure to create decent jobs for the residents of border areas has driven them towards porter jobs, because this has been the only way for them to feed their impoverished families.

Young and old, men and women are equally involved in this job in the border provinces of Iran.

In the village of Sheikh Saleh, a place near the Salas-e Babajani County in the province of Kermanshah, one can meet women and girls who endure the burden of cargos much heavier than their own weight, so that they can keep the lights on in their homes. With the little money they earn, porter women try to help their fathers, their husbands and their own loneliness.

Tahmineh, 37, has been a porter woman for several years. She says, “Being the one to endure the hardships is painful for a single koolbar woman. Kurdish women are never ashamed of working hard, but the difficulty of working as a koolbar quickly shows in our faces and makes us look old. Of course, it has been a year or two that they are not allowing women and men to work. However, two years ago, women used to work. I used to work. I would go to Salas and work with a group of people. I went to the mountains a few times and brought goods. But today, I can no longer walk.”

On her motive for doing the hard work of a porter, Tahmineh says, “I was the only one to take care of my parents. So, I had no choice but to find a job to earn our living. The goods I carried were terribly heavy, requiring a lot of strength. I felt as if my back was breaking under the weight. We had to walk some four to five hours, I tolerated all this because I had to earn the money and I needed it. This was all I could think of.”

Narmineh and Saghar are very young. Poverty has forced them to work as koolbars or porters. They say, “When you have to, you will do any work you can. When there are no jobs we are forced to carry goods. There are women in Paveh who head to the mountains for only 70,000 toumans. They tie heavy loads of 20 kg to their backs. They want to make money and feed their children. You would call it smuggling but we want to bring bread to our tables.”

Donya is another young woman who heads a household and has experienced being a porter. She also cited poverty as the reason for doing so.

All these women are after one thing: Gaining money for their living!

The financial and administrative deputy of the Relief Committee in Salas-e Babajani said, “Women face numerous financial problems which make them work as porters. In a short time, they suffer physical problems. Most women in the city are supporting their husbands… Usually women who are heads of household team up with others and go to the mountains.”

The Iranian regime issued an order on July 31, 2017, to block the unauthorized passage of porters in four bordering provinces including West Azerbaijan, Kurdistan, Kermanshah, and Sistan and Baluchestan. By doing so, the regime has blocked the only remaining source of revenues, albeit tedious and inhumane, for the residents of the border areas.