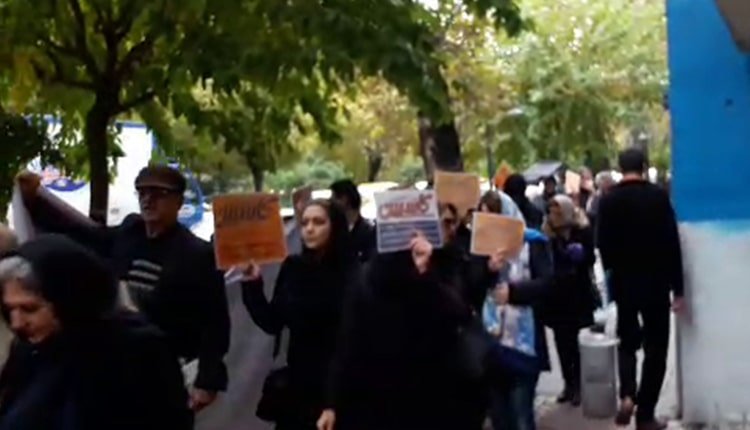 On Tuesday, November 13, 2018, hundreds of clients plundered by the IRGC-backed Caspian Credit Institute gathered in protest outside the Judiciary’s building in Tehran and then marched on in downtown Vali-Asr Avenue.

The slogans chanted by protesters were directed against top regime officials. They cried out, “Complicit thieves have blocked the rule of law,” “products of officials’ work are plunder and embezzlement,” “Our properties have been robbed by the Central Bank.”

On the same day in Rasht, capital of the northern Gilan Province, plundered clients of Caspian Institute protested against robbing of their money and deposits and unaccountability of officials. The protesters, mainly women, chanted, “Threats and jail are no longer effective,” “Caspian has committed robbery but the government has done nothing,” “the government claiming hope and insight was blind and did not see the robbing of our money,” “we want our money back, not hollow promises.”

Earlier, on Saturday, November 10, 2018, the families of political prisoners, mainly women, gathered outside the General Department of Prisons in Tehran.

Also on Saturday, families of political prisoners gathered outside the Central Prison of Urmia while accompanied by brave youths. They also protested pressure imposed on prisoners with regards to money, food, medical care and hygiene.

Security forces prevented other people from joining the families of political prisoners.

Officials in charge of the Central Prison of Urmia have cut down on the political prisoners’ food ration and hygiene products in recent months to bring greater pressure on them.