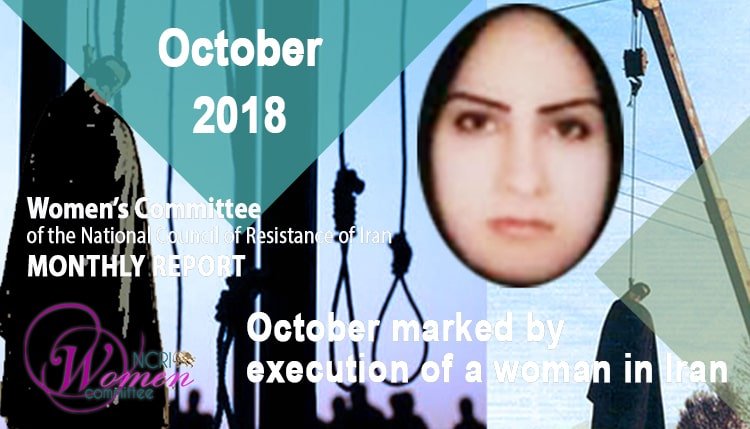 October marked by execution of a woman in Iran

Just a week before the International Day against the Death Penalty, the Iranian regime executed a woman who was a juvenile at the time of the alleged crime.

Zeinab Sekaanvand, 24, was hanged on October 2, 2018, in the Central Prison of Urmia along with four other prisoners despite a number of appeals from UN Special Rapporteurs and the UN Secretary-General since her conviction in October 2014.

This was the  84th woman executed during Rouhani’s tenure.

Daughter of an impoverished family, Zeinab Sekaanvand had been forced into marriage at the age of 15.

Ms. Sekaanvand had claimed that before she murdered her husband, she had been physically and verbally abused by him for month. She had asked for divorce but he did not agree.

She had also referred to the police station multiple times, seeking help and support in the face of her husband’s violence but officials did not heed her pleas or carry out any investigation as measure to help the young woman.

Ms. Sekaanvand was also brutalized for 20 days at the police station, after confessing to the murder.

Later, however, she told the judge that her husband’s brother, who had raped her several times, had actually committed the murder.

Amnesty International censured the execution, indicating that Zeinab Sekaanvand did not have a fair trial.

“She was arrested when she was just 17 years old and sentenced to death for the murder of her husband, whom she married at the age of 15. Not only was she a child at the time of the crime, she was subjected to a grossly unfair legal process,” said Amnesty International’s Research and Advocacy Director for the Middle East and North Africa, Philip Luther, in a statement appealing for the life of Zeinab Sekaanvand.

Female teacher, activist among detainees of nationwide strike in Iran