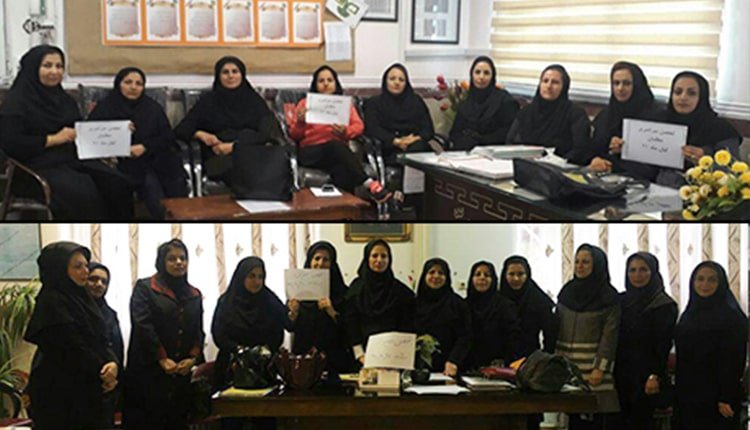 Teachers and educators began their second round of nationwide strikes and sit-ins on Tuesday, November 13, 2018.

The Coordination Council of Teachers and Educators called for a second round of protests on Tuesday and Wednesday, November 13 and 14, 2018, where teachers do not go to classes and stay in the schools’ offices.

The strikes and sit-ins of Iranian teachers and educators is to protest high prices and inflation. Their demands are decent salaries, respect, health insurance, free education for Iran’s children and release of jailed teachers.

Women teachers have been particularly active in this nationwide strike. So far, the Iranian Resistance has received pictures from dozens of schools in Isfahan, Ardebil, Saqqez, Karaj and Alborz Province with women participating in the sit-ins. In some schools, students have also joined their teachers in solidarity.

The first round of the strikes and sit-ins of teachers and educators was held on October 14 and 15, 2018, in 62 cities in 31 provinces. They had announced that if their demands are not met they would start another round of protests.

In the first round of their nationwide strikes and sit-ins, teachers protested against inflation, high prices, dwindling purchasing power of teachers, privatization of education and receiving tuition from students, as well as fraud and embezzlement in the Teachers’ Reserve Fund.

Among other things, teachers and educators are demanding pay raise proportionate to the poverty line, insurance, elimination of discrimination in the educational system, standardization of schools, and securing their safety.

One of the most serious demands of Iranian teachers is the release of imprisoned teacher activists, and recognition of independent teachers’ unions.