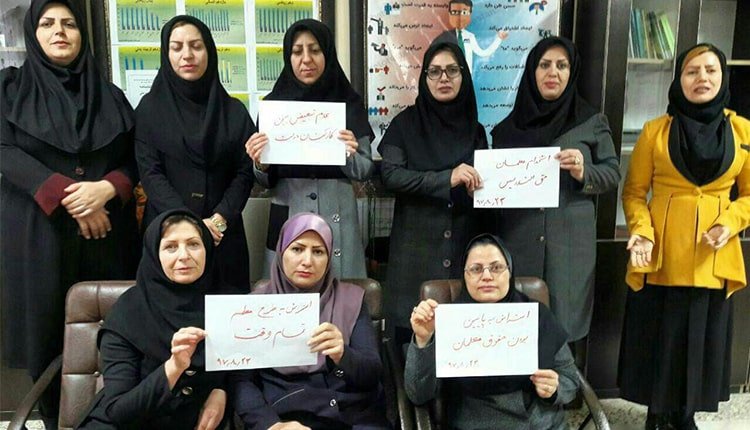 Teachers go on strike; other sectors continue their protests in Iran

The strikes and sit-ins of teachers as well as protests by other social sectors continued in recent days across Iran.

The strikes and sit-ins were held despite various forms of threats and harassments by the regime’s repressive organs and forces and the summoning and arrests of a number of teacher activists.

The strike and sit-in of teachers were held in protest against the arrest and suppression of teachers, their dire living conditions, unbridled inflation and their dwindling purchasing power. They also demanded the elimination of discrimination against employed and retired teachers and educators.

In some cities, students and their parents joined the teachers in solidarity.

In other news, a group of brave housewives in Mashhad took to the street in protest to water cut off and blocked the road on Tuesday, November 13, 2018.

On the same day, professors of Farabi Medical Sciences University in Kermanshah refused to hold classes in protest to the horrific conditions of education. The university’s students also held a protest on campus from 11 a.m. until 6 p.m., demanding freedom of speech and revoking tuition fees for education.

On Monday, November 12, 2018, depositors of the Alborz Nahalneshan Development Institute in Karaj held a protest rally outside the Central Bank in Tehran to protest swindling of their money and properties. The presence of women in this gathering was substantial. The State Security Force (SFF) and anti-riot troops attempted to disperse and prevent the gathering of the defrauded depositors, but faced staunch resistance by protesters and failed to make any arrests.

On the same day, the residents of Vanak Village in Tehran held a protest rally against the demolition of their houses. Residents of the Vanak Village gathered at the site of one of the demolished houses in the periphery of Az-Zahra University.

SSF agents, municipality workers, and the traffic police had surrounded the Vanak Village since 5:00 a.m. to demolish the houses confiscated by Az-Zahra University.

The residents of these houses and their supporters gathered under the rain at 7 a.m. outside Az-Zahra University, and held up banners to protest such an inhuman measure.

Also on November 12, 2018, employees of the Khomeini Hospital in Karaj held another protest. They have not received their salaries for 12 months.

A year after the earthquake, deplorable plight of women and children