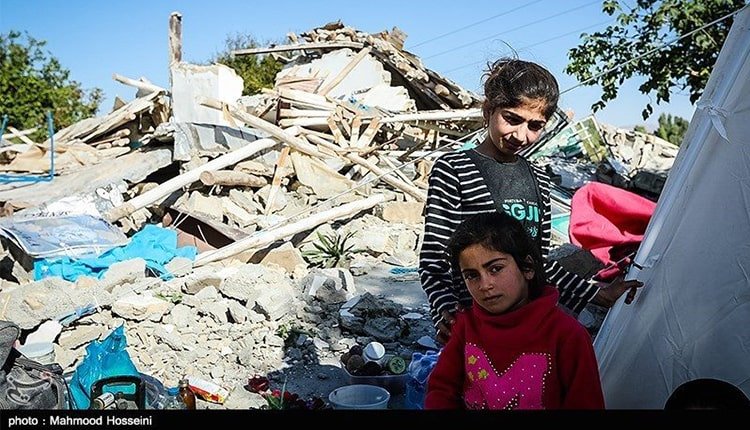 A year after the earthquake, deplorable plight of women and children

One year after November 12, 2017, when the year’s deadliest earthquake of 7.3 magnitude hit vast parts of Kermanshah Province in western Iran, residents of the afflicted areas continue to live in disastrous conditions, suffering from various psychological problems.

The earthquake damaged 10 cities and 1,930 villages, and destroyed more than 100,000 housing units, leaving at least 620 dead and 9,338 people wounded. The cities of Qasr-e Shirin, Sarpol-e Zahab and Salas-e Babajani were hit worst.

With 5,200 aftershocks over the past year, the deprived survivors in the afflicted areas do not feel secure and are constantly in a state of anxiety.

Mehdi Tahbaz, governor of Sarpol-e Zahab announced that some 30 percent of those who lived in rented urban housings are now living in temporary arrangements on the streets.

The government’s promises have proven to be hollow. The teams assigned to help the people, have left them alone. The contractors employed to rebuild the stricken areas, have abandoned their projects and banks do not grant loans to the victims of earthquake. Some of the victims have to live in tents in the freezing cold weather. (The state-run ICANA news agency – November 7, 2018)

According to Parviz Fattah, head of the Relief Committee, the government has not granted gratuitous loans which it had promised to earthquake victims. (The state-run Tasnim news agency – January 14, 2018)

Sarpol-e Zahab was one of the areas hit hardest by the earthquake. Most villages in Sarpol-e Zahab do not have drinking water. 80 percent of the city’s infrastructures have been damaged or destroyed. The municipality does not provide any services and people have removed the rubbles at the own expense, paying 2 million toumans to rent mechanical shovels. The Housing Foundation was supposed to do this job, but announced that it cannot do so. Only 20 percent of the populace live in their own homes, but they would rather live in trailers because of repeated aftershocks. Some are prepared to sell their kidneys to reconstruct their houses. One can imagine the situation of women and children in such conditions.

Another problem in these areas is sanitation. Vermin, insects and animal feces around the tents are harmful for children and their living environment. The number of lavatories and bathing facilities are very limited and the hygiene is very poor in these areas.

Shortages of washing detergents including soaps and shampoo, wet wipes and diapers, women’s tissues, underwear, bath towels, etc. are among the problems the residents of afflicted areas face. The persistence of these conditions will lead to the outbreak of various diseases among women and children.

Families of nine and more live in a tent or a trailer. Lack of powdered milk, food and medicine are also among the serious problems in the quake stricken areas where children suffer from mal-nutrition and numerous other illnesses.

A young woman while crying says, “I am sick and tired of this life. Twice, I attempted to commit suicide to get rid of this life. I wish I could die and be relieved of so much pain. I cannot do anything. I am sick, myself. This child is sick, too. His treatment costs 150,000 toumans a day and I swear to God, I don’t have it.”

A 60-year-old mother who has undergone an open-heart surgery after the earthquake, says, “I am sleeping here in the cemetery with the dead. But they do not allow even this much to us. Now, they say, ‘You must leave here.’ They say, ‘We want to raze here with a bulldozer and build Ahmad-bin-Es’haq market!’ There’s not even a drop of warm water so that we can bathe. We have received no aide from the government. Nothing!”

One of the regime officials says, “Hygiene is very poor. The municipality has not given us any money to do anything. I wish the Interior Ministry would announce the things they have done for a city like Sarpol-e Zahab. The municipality was supposed to issue the license for construction of damaged structures, and the Interior Ministry had to pay the cost of the licenses. However, no money has been granted for such a project. Not a tanker, a sewage machine or even a sprinkler. They have not allocated any budget to us. People are removing the rubbles at their own expense. For every round of removal of rubbles, they have to pay nearly 2 million toumans to rent a bulldozer and a truck. There are people who are willing to sell their own kidneys to pay for reconstruction of their houses.”

No water for bathing

The official IRNA news agency published a report on the deplorable conditions of women in the Chaman bar Aftab village in one of Sarpol-e Zahab counties. IRNA reports:

In Chaman bar Aftab village, girl children take a bath with cold water and washing detergent in an open area in front of the public’s eye. This has become a natural routine in this village. The village’s women have a lot to talk about and complain about the shortages and the medicines and medical care they need.

Zahra Sirvan Erfan is sitting inside a trailer and searching through the hair of a 4-5-year-old girl. She says, “This innocent child has not been able to take a bath because she is weak and the water in the jerry cans is cold. Now, she has lice in her hair.”

Many children, women and elderly have contracted skin diseases because they cannot bathe regularly.

Zobeideh Mohammadi, another woman in this village, is suffering from tremendous pain in the left arm and bad headaches due to severe stress.

Soheila Jamshidi, mother of two small children and wife of an epilepsy patient, says, “I have lost my house and all its furniture in the earthquake. Today, I am living in a trailer with no showers or bathroom. My husband cannot work because of his epilepsy. He has finished his medicine and so, he has seizures all the time. I don’t know what kind of an insect bit my son last night, that one side of his face has completely swollen. And I don’t have any money to take him to a doctor or medical center.”

Another woman laments, “Most of the inhabitants of this village have consumed beef or fruits only once over the past nine months. Some have not consumed any.”

Sonia, another woman residing in this village, sobs and says, “The children of this village have been asking their parents over the past nine months for a new suit, a pair of new shoes, a pair of slipper or socks, tooth paste and tooth brushes, combs or toys. Some of them have their own childish dreams and ask for biscuits, raisins, figs, chips and fruits.”

Sonia adds, “One of the main demands of the people of this village is regular spraying of insecticides, so that they could rest in their trailers without worrying for their kids and infants being bitten by insects. Many women believe that they cannot leave their infants in the trailers. Also, in light of poor hygiene, and the existence of snakes, scorpions and rapid dogs, we cannot leave our children alone in the village.”

Women and girls have to endure much more difficult conditions living in absolute poverty. People have lost their trust and families have little control over their children. Most children have been abandoned on their own. Violence breaks out easily and fathers do not allow their daughters to go to school due to poverty. People are disappointed and depressed and no one has any privacy.