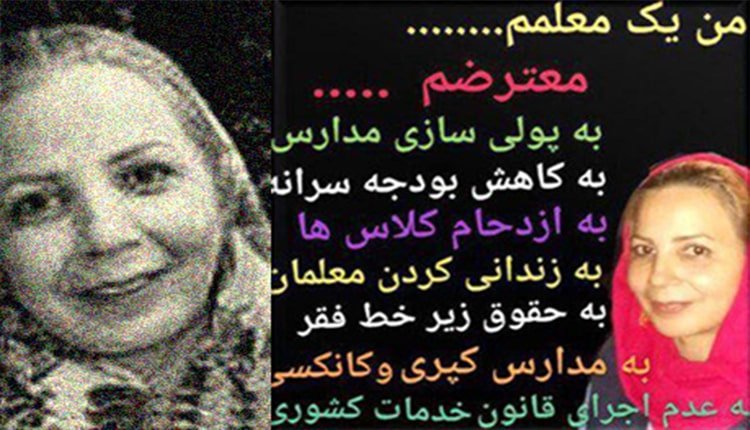 Female teacher, activist among detainees of nationwide strike in Iran

The Coordinating Council of Iranian Educators’ Guild Organization has announced that 12 teachers have been arrested so far. A female teacher named Ms. Vaezi from Shiraz and Fatemeh Bahmani, a female activist from Arak, are among the teachers arrested and detained during the strike and the sit-in of teachers in various cities across Iran.

The strike and sit-ins of educators and teachers were held on November 13 and 14, 2018, and female teachers participated actively in this protest movement.

During the wave of arbitrary arrests of teachers and activists of this class, Mr. Abbas Vahedian was arrested by security forces on October 11, 2018, because of his activities in the Teachers’ Guild Association in Mashhad. He was transferred to an unknown location and no information is available on his fate.

Hengameh Vahedian, Mr. Abbas Vahedian’s daughter, has announced in an open letter that no knowledge is available on her father’s fate.

Hengameh Vahedian expressed concern over his father’s lack of access to a lawyer and said, “Our main problem is that no (government) institution accepts responsibility and all of them claim to be unaware of the case. Our minimum right as a prisoner’s family is to know where he is, how he is, and to have a short visit. However, this information has not been provided for 33 days and we do not know under what charges he is being arrested and where he is being held.”

In another part of this open letter, Hengameh wrote, “My dear father, I am ashamed that after 36 days I have been unable to find you. If it were not for you and people like you, then I and my generation will never reach true freedom. I went to all the organizations and had to deal with all sorts of ugly and nasty behaviors, but I will never step back and I will continue. I’m sure that one day we will celebrate our freedom together with all your friends.”

Golrokh Iraee reaches out in open letter to save her husband