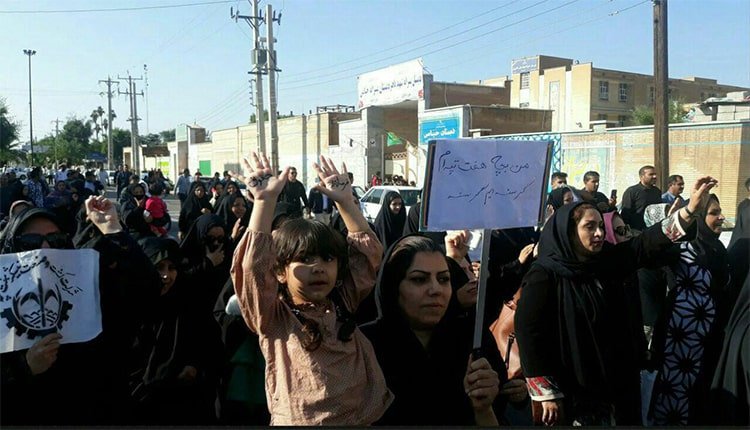 The strike and demonstrations of sugarcane workers of Haft Tappeh Industrial Complex in Shush, saw the widespread, active and outspoken participation of women during the weekend, November 16-18, 2018.

Workers of Haft Tappeh Sugarcane Industrial Complex have been on strike for 14 days.

Sugarcane workers of Haft Tappeh staged protest gatherings outside the Governorate’s building in Shush, demanding end to the private ownership of the complex as well as past due payment of their salaries.

Many workers were accompanied by their wives and whole families. Women had brought their pre-school and elementary school children with them to the protest march and rallies. The children held placards which read, “We are hungry! HUNGRY.”

In one of these speeches, an outspoken woman said, “Workers should have been working in the factory, right now, so that the wheels of the factory would turn. But they must come to the streets and protest. Why? Why should they protest? Because this city does not have anyone in charge! We don’t have responsible officials? We have no governor…

“Dear brothers, you should regard us as one of you. We are your sisters. We expect that your sisters, mothers, wives and children would join us. Life has truly become difficult. Little children want different things and become impatient. Officials must be ashamed of the empty tables of Haft Tappeh sugarcane workers. What does it mean? It means that we are hungry.”

Another outspoken woman told the gathering of Haft Tappeh sugarcane workers outside the Governorate of Shush, “Another thing is that the governor and officials gathered and said, ‘We are discussing to see how to resolve your problems.’ (I ask,) ‘Sir, how many workers were there when you were solving our problem? How could someone whose stomach is filled be aware of the conditions of a hungry man?”