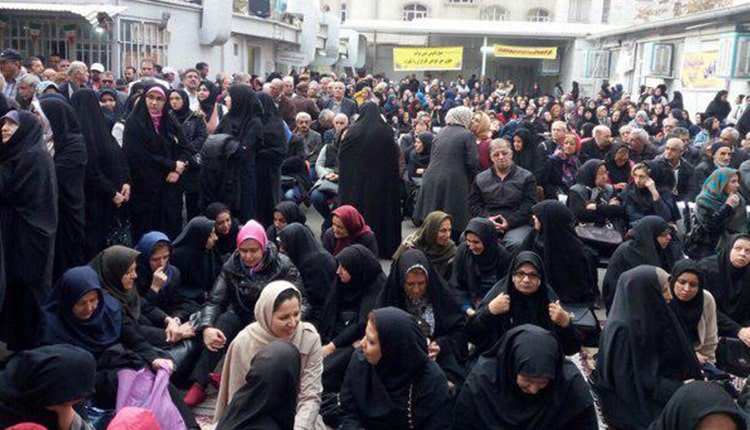 On the day of the adoption of the labor law, hundreds of Iranian workers marched in the streets of Tehran and gathered in front of the House of Workers and the Budget and Planning Organization in the capital. Women widely participated in this large protest rally.

The workers started gathering in the early hours of morning outside the House of Workers on Tehran’s Abu-Reyhan Ave. Hundreds of toiling men and women held placards. Some of them read, “No law can prevent workers from demanding their rights.”

A labor activist taking part in this gathering said, “They cannot crack down on workers and arrest them, like they did in the case of the workers of Haft Tappeh, because they participated in a protest. We, workers, declare today that according to principles 26 and 27 of the law, it is our right to form our powerful and independent organizations. It is also our right to hold protest marches and go on strike.” (The state-run ILNA news agency – November 20, 2018)

Simultaneous with this major rally in Tehran, more protests and strikes were held by workers in the cities of Shush and Ahvaz in the southwestern province of Khuzestan.

Workers of Haft Tappeh Sugarcane Industrial Complex held the 16th day of their protests and strike on Tuesday, November 20, 2018. Also the workers of the Steel Mill of Ahvaz continued their protest on Tuesday. Women actively joined the workers’ protests.

Students held a picket line protest on Tuesday in the central campus of Tehran University in solidarity with the workers of Haft Tappeh, supporting their demands. The students chanted, “We are children of workers, we stand by them,” “Students, teachers, workers, unite.”

On Monday, November 19, 2018, groups of students held protests and pickets at the School of Psychology of Tehran University and in Tehran’s Allameh Tabatabaii University. They expressed their support for the protests by teachers and workers. Students read a declaration in support of the strike of Haft Tappeh workers.

Women arrested in the aftermath of nationwide strike of teachers