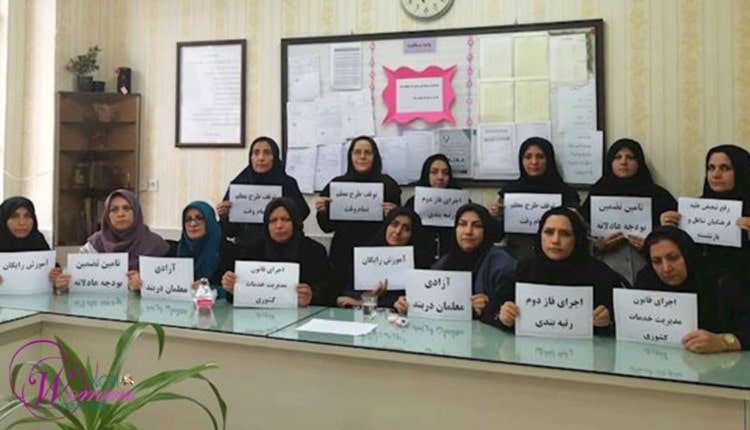 Women arrested in the aftermath of nationwide strike of teachers

Women joined extensively in the second round of nationwide strikes and sit-ins of teachers and educators held on November 13 and 14, 2018, in schools in over 40 cities in Iran. Women also got arrested in the wave of crackdown on teachers in the aftermath of the second round of their protests.

Following the call from the Coordinating Council of Iranian Educators’ Guild Organization, Iranian teachers refused to attend classes and held sit-ins inside their schools.

The second round of teachers’ strike started despite the repressive security forces’ attempt to intimidate Iran’s teachers by arresting and summoning them and sending threats of various kinds after the first nationwide strike of teachers held last month.

Iranian teachers and educators, however, did not remain silent, and for the third time this year, they resonated their voices throughout the country.

Iranian teachers went on strike protesting the suppression and imprisonment of teachers, their deteriorating living conditions, inflation, excessive high prices and reduced purchasing power. They called for the elimination of discrimination against retired and working teachers.

In some cities, students and their parents joined and supported the strikes and sit-ins of teachers.

As usual, the Iranian regime attempted to suppress the teachers’ strike by arresting, summoning and threatening active teachers including women teachers.

Widespread support for teachers’ demands, however, showed that their righteous calls would not be subdued but are further strengthened.

According to the Coordinating Council of Iranian Educators’ Guild Organization, 12 teachers including two women were arrested, 30 teacher activists were summoned and interrogated, and over 50 threatening messages were sent to protesting teachers.

Repression and use of brute force are not a way out for the Iranian regime, but will add to its problems each day, because any arrest and imprisonment of teachers will spark a new wave of protests and opposition.

Mrs. Maryam Rajavi, President-elect of the National Council of Resistance of Iran, saluted the teachers and educators who held sit-ins in order to achieve their rights, and called on the nation, especially the youth, to express solidarity with them, saying: “The catastrophic situation of the employed and retired teachers is the product of the repressive policies of the mullahs regime, and as long as this regime is in power, it will even get worse… The clerical regime has only brought about torture and execution, war and terrorism, poverty and unemployment, and corruption and plundering for the people of Iran.”