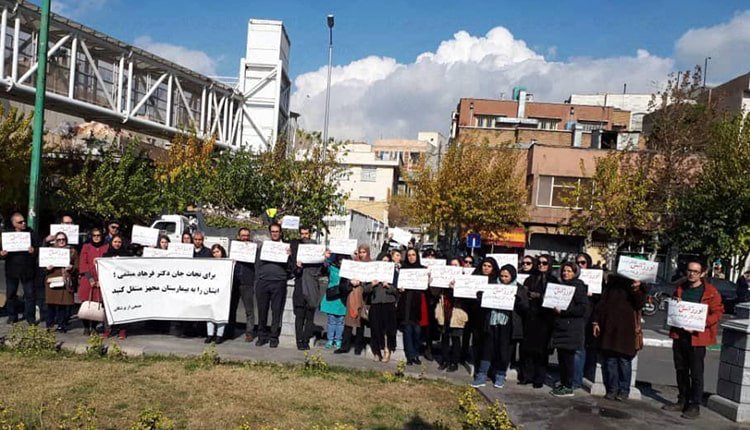 Iranian women continue to play an active role in the large protest gatherings of Ahvaz and Haft Tappeh workers. In recent days, they have also been active in the protests by various other sectors, including the defrauded investors and hospital staff.

On Monday, November 26, 2018, Iranian women joined the workers’ protests in Ahvaz. Protesting workers crossed the barrier of anti-riot forces and marched into the central city of Ahvaz and chanted, “Government, mafia, congratulations on your unity!”

Also on Monday, November 26, 2018, a group of defrauded Iranian women once again held a protest rally again the Caspian Credit Institute in Rasht.

On the same day, a group of Iranian women and men, employees of Khomeini Hospital in Karaj, gathered in front of the hospital in protest to the hospital’s poor condition and the failure to pay a years’ delayed wage arrears.

A group of male and female civil activists gathered across from the parliament building in Tehran on Monday, November 26, 2018, in support of Dr. Farhad Maysami, a political prisoner on strike. Farhad Meysami, a civil activist who is imprisoned in Ward 8 of Evin Prison, has been on strike for 118 days. After violently being transferred to a clinic contrary to his will, he has not had any connection outside of prison since September 26, 2018.

On Friday, November 23, 2018, a group of defrauded Iranian women and men from the Caspian Credit Institute in Kerman organized a protest rally in the main branch of the institute in protest against the looting of their assets.

At the same time, the creditors of the Arka Khodro company in Kermanshah, including Iranian women, protested against the lack of delivery of their cars after a few months from the deposit of the amount requested by the company. Arka Khodro has taken payment from vehicle buyers and was supposed to deliver their cars in three months, but it has been almost a year that no vehicle has been delivered nor have the buyers gotten their money back.