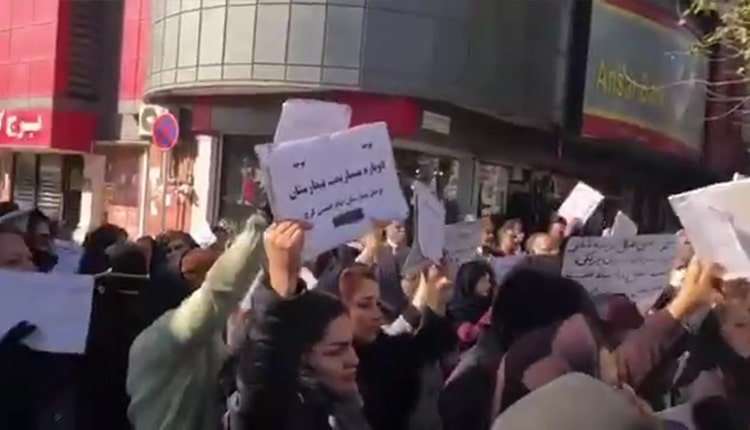 During recent days, various social strata including students, defrauded investors and workers of Ahvaz steel and Haft Tappeh, continued their protest movements in Iran with the wide presence of women.

On Thursday, November 29, 2018, a group of employees of Khomeini Hospital in Karaj gathered once again to protest against their delayed salary payments. The presence of women in this protest gathering was active.

On the same day, a group of defrauded depositors of the Caspian Credit Institute in Kerman, with a significant presence of women, gathered in front of the Bassij Branch to protest against the plundering and looting of their invested assets.

On Thursday, November 29, 2018, a group of defrauded investors of the Interest-free Loan Fund of Ali Ibn Abitaleb in Babol, gathered in front of the city’s Governorate building in protest against the bank’s failure to meet their demands.

On the same day, in another protest movement in Abadan, a group of women confronted Morteza Bank, head of the Free-Trade Zone, to address their problems and unresolved issues. One of Morteza Bank’s bodyguards threatened the women to decapitation.

On Wednesday, November 28, 2018, a number of retired Ahvaz medical doctors joined the protests of the Ahvaz Steel workers in front of the city’s Governorate building and held a protest rally with them.

On the same day, a group of students from the Tehran University of Art, with the presence of women, gathered in solidarity with the workers of Ahvaz Steel and Haft Tappeh and showed their unity and support with the strike of these workers.

On Wednesday, November 28, 2018, a group of civil activists in Arak gathered in front of the HEPCO Arak court, in protest against the judicial sentences against labor and civil activists.

On the same day, a crowd of people protested against the lack of delivery of their registered cars and its sale on the free market by the SAIPA Company. The presence of women in these protests was active and noteworthy.

From March to November 2018, women had an active presence in at least 735 protest across Iran.