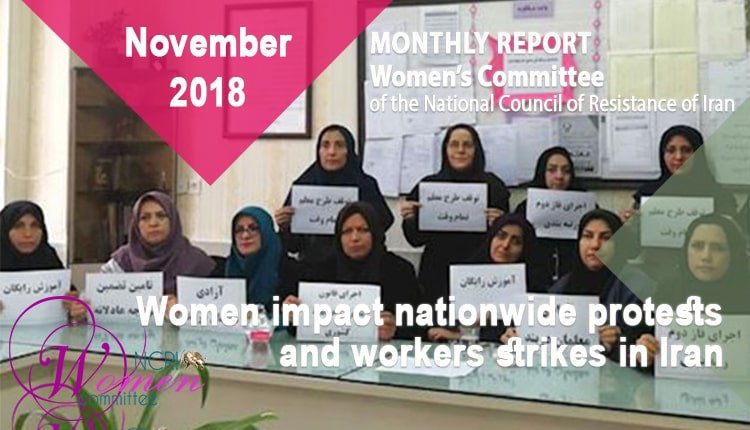 The month of November was marked by widespread and active participation of Iranian women in all major protests. The NCRI Women’s Committee Monthly Report – November 2018 glances through the major protests where women played a major role.

Teachers and educators began a second round of strikes and sit-ins across the country on November 13 and 14, 2018. The strike was called for by the Coordination Council of Teachers and Educators. Teachers did not go to classes and stayed in the offices.

The strikes and sit-ins  of Iranian teachers and educators were held in protest against the arrest and suppression of teachers, their dire living conditions, unbridled inflation and their dwindling purchasing power. They also demanded the elimination of discrimination against employed and retired teachers and educators.

One of the most serious demands of Iranian teachers was the release of imprisoned teacher activists, and recognition of independent teachers’ unions.

Women teachers were particularly active in the nationwide strike.

In some cities, students and their parents joined the teachers in solidarity.

The strikes and sit-ins were held despite various threats and harassments by the regime’s repressive organs and forces and the summoning and arrests of a number of teacher activists.

In some schools, students and their parents also joined their teachers’ strike in solidarity.

The first round of the strikes and sit-ins of teachers and educators had been held on October 14 and 15, 2018. They had announced that if their demands were not met they would start another round of protests.