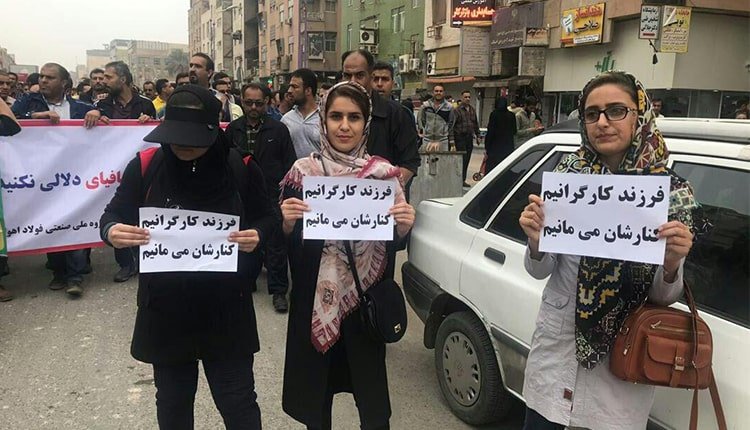 Women’s active participation in protests have continued in various cities across Iran.

On Sunday, December 2, 2018, medical and paramedical students at Tehran’s Azad University protested in front of Rouhani’s office in Tehran. These students, who included a significant number of young women students, were expelled from university two weeks after being registered, attending classes, paying tuition and being issued a student card. They were told by the university that they were accepted in error. Three students were arrested for participating in this protest rally.

Throughout Saturday and Sunday, December, 1 and 2, 2018, some 300 workers and employees of the Karaj Hospital staged a protest against their one year of wage arrears. The Chair of the Labor Council of the Karaj Hospital said, “The staff of the hospital continue to protest against the one-year wage arrears, and on Saturday, December 1, the protest gathering was held with the presence of about 300 personnel.” In the protest, a number of dialysis patients along with their families from the Alborz Province gathered alongside the hospital staff on the main street in front of the hospital. Women’s active participation in the protest was impressive. They chanted, “Governor, leave your chair and think of us.”

On Sunday, December 2, 2018, a group of citizens and women living in the Azadegan Valley in Khuzestan, protested in front of the governorate building against the inadequate urban services and the accumulation of water in the passageways. In a protest movement, the residents of Azadegan turned their back on the governor’s representative as he was speaking to them.

On Saturday, December 1, 2018, active participation of women was also evident in the 22nd day of the protest and strike of Ahvaz Steel workers on the city’s streets. They chanted, “No nation has seen so much injustice.”

At the same time, a number of people protesting the official documents notaries’ exams of gathered in front of the regime’s parliament. The protesters criticized the way in which the tests were being held by the organization of registration of documents and real estate. They held up banners calling for the test to be canceled.

On Saturday, December 1, 2018, as the Iranian national students day nears, a group of students from Yazd University placed their food trays at the center of the cafeteria and refused to eat food. Women’s active participation was evident in the above protests.