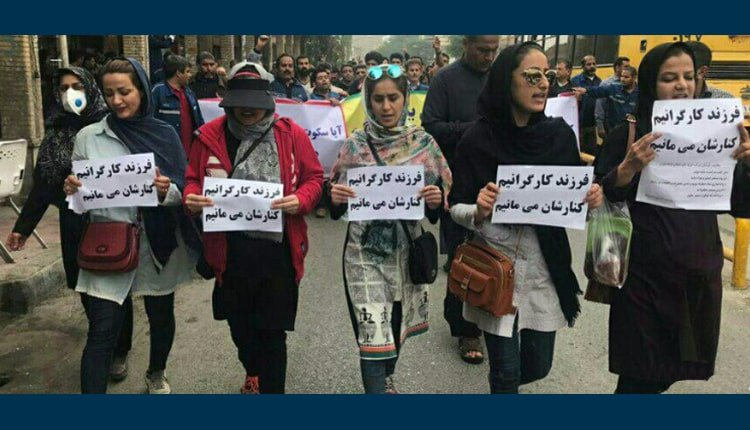 Several student protests have taken place in universities across Iran on the eve of Iran’s national Student Day.

One of the student protests was held on Tuesday, December 4, 2018, at the Amirkabir University of Technology in Tehran in solidarity with the workers on strike and in prison, and imprisoned students and teachers.

On the same day, students at Razi University in Kermanshah announced their support and solidarity with the Haft Tappeh sugarcane workers.

Also on Tuesday, the 25th day of the protest of Ahvaz steel industrial workers, brave women were at the forefront of the march and gatherings in Ahvaz.

On Tuesday, December 4, 2018, the students began a hunger strike at Sahand University of Technology in Tabriz in protest against the lack of accountability of the university authorities to their rightful demands.

At Babol Noshirvani University of Technology, in protest to the suppression of students, a crowd of students chanted slogans of, “Stop student suppression.”

In addition, students of Sirjan University of Medical Sciences, placed their food trays on the floor of the cafeteria in an act of protest to the food quality and bad services.

On Tuesday, December 4, 2018, we also witnessed the protests of defrauded creditors of the Caspian Credit Institution for consecutive days in Rasht and Tehran.

On the same day, in protest to the deteriorating health condition of Dr. Farhad Meysami, a civil activist detained in Evin Prison, a group of female and male civil activists gathered in front of the regime’s parliament in Tehran and called for his transfer to a hospital.

On Monday, December 3, 2018, a group of defrauded creditors of the Caspian Credit Institute held a protest rally in Tehran.

The same day, a group of defrauded men and women cheated by the Gold Samen Website held a protest rally in front of the Public Prosecutor’s Office in Tehran.

On the same day, victims of the Polark Compost Manure Manufacturing Company held their second protest gathering in Dezful.