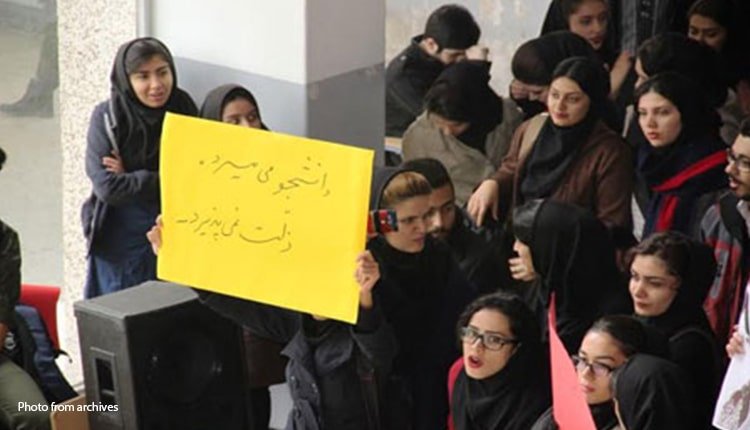 Iranian students, workers step up their protests in December

Iranian students in Babol, the staff of the Hospital of Karaj, as well as workers and employees of the Petrochemical Company in Ilam, held protests on Wednesday, December 5, 2018. Women actively participated in these protest gatherings.

Iranian students at Noshirvani University of Babol held a gathering on Wednesday, December 5, to observe the Student Day. Iranian students sang songs special for the occasion.

On the same day, December 5, 2018, the employees and staff of the Hospital of Karaj held another protest outside the hospital against non-payment of their wages and salaries for one year. The new round of protests has actively begun since the last week of November.

In a sad development, the mother of an imprisoned worker attempted suicide in the gathering of workers and staff of the Petrochemical Company in Ilam. The gathering held on Tuesday, December 4, 2018, was in protest to the fraudulent process of recruiting new employees and the company’s failure to pay the salaries of its workers and employees.

Saeed Mansouri, one of the workers of this petrochemical company, has been arrested for two months for demanding his salary. His mother attended the gathering of the company’s workers and attempted to commit suicide. Fortunately, other workers managed to act on time and save her life.

A group of families of political prisoners and civil activists attended the funeral service of the mother of Ibrahim Firouzi, an imprisoned Christian. Ms. Farangis Mazloumi, mother of political prisoner Soheil Arabi, attended the funeral and said, “Unfortunately, for one year, this mother did not manage to see her son. Ibrahim was not allowed to make phone calls and finally, his mother died without seeing her son.”

Women have participated in at least 735 acts of protest from March until the end of November.