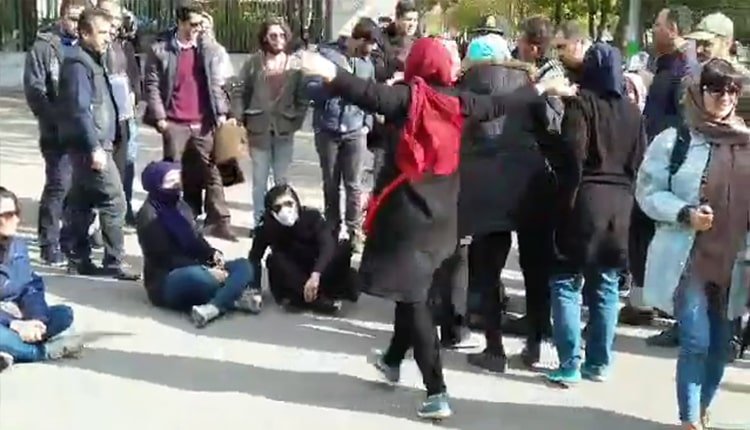 Iranian students held gatherings in Tehran, Tabriz, Semnan, Babol, and other cities across the country on Saturday, December 8, 2018, to honor and observe the Student Day in Iran.

In Tehran, students of Tehran University, held a gathering and sit-in by the entrance gates of the university to observe the Student Day. When the State Security Force intended to disperse the participants, girl students stood up to them. One of the girl students called on other students to come to their aid.

On the same day, students of the Teachers’ Training University in Tehran also held a gathering on the occasion of the Student Day.

Students of Electrical Engineering and Computer Sciences at the Noshirvani University of Babol, Mazandaran Province in northern Iran, held a gathering on their campus while holding pictures of the students killed on December 7, 1953. They called for the release of imprisoned teachers and students.

Students of the University of Technology No. 1 in Tabriz, East Azerbaijan Province, northwestern Iran, also commemorated the Student Day by holding a gathering on Saturday and lining up their food trays on the floor to protest the low quality of food.

In Semnan, students of the School of Engineering and Computer held a free speech forum to commemorate the Student Day, and a number of the students made speeches. Two days earlier, Thursday, December 6, 2018, when the mullahs’ president, Hassan Rouhani, visited the University of Semnan, students shouted at him and asked, “What is your answer to high prices and inflation?”

In Kermanshah, western Iran, a group of teachers held a picket on the occasion of the Student Day and congratulated all Iranian students. They called for the release of imprisoned teachers and workers.

On the same day, employees of the Hospital of Karaj held their 34th round of protests to demand their unpaid wages long overdue.

On December 6 and 7, 2018, a woman teacher from Isfahan and Ms. Adineh Baigi -wife of the imprisoned teacher activist Mahmoud Beheshti- paid visits to Hamid Rahmati, a teacher, who has been on hunger strike since December 1. He is sitting in the court yard of the Department of Education in Shahreza, Isfahan Province, demanding freedom of imprisoned teachers.

On Thursday, December 6, 2018, some 150 of the staff and employees of the Parseh Clinic in Kermanshah staged a protest against sealing off of the clinic. A large number of women participated in and led this protests. They were demanding that the Prosecutor of Kermanshah stop this inhuman measure as a result of which a large number of people lose their jobs.

defrauded clients of the IRGC-backed Caspian Credit Institute held a gathering outside the mullahs’ parliament in Tehran on Thursday, December 6. A similar protest gathering ws held in Kerman in front of one of the branches of the institute.

Also, on Thursday night, a group of political and civil activists visited the mother of Dr. Farhad Maysami, political prisoner who has been detained for his protest against the mandatory veil.