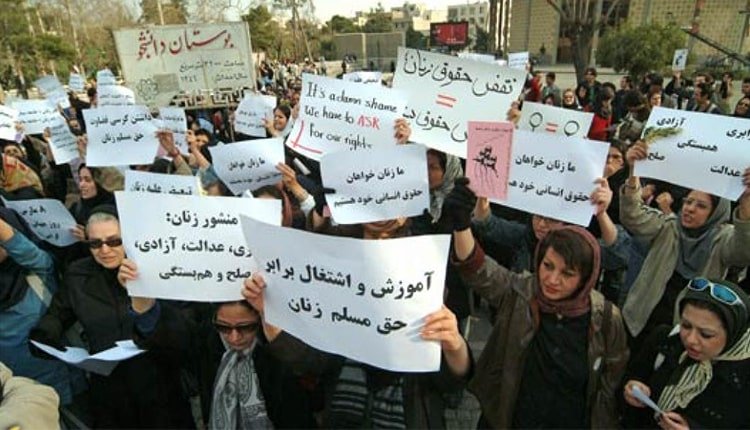 Women’s rights are human rights. December 10 is the Human Rights Day and marks the 70th anniversary of the Universal Declaration of Human Rights which stipulates the rights all human beings are entitled to. In Iran ruled by a theocratic regime, however, Iranian women are deprived of virtually all these rights. This has been attested to by the most authoritative bodies whose mandate is to protect human rights.

Death penalties handed down for women

The United Nations General Assembly adopted its 65th resolution in mid-November expressing “serious concern” at the “alarmingly high frequency of the imposition and carrying-out of the death penalty” by the Iranian regime, including the imposition of the death penalty against minors and persons who at the time of their offence were under the age of 18, and executions undertaken against persons on the basis of forced confessions or for crimes that do not qualify as the most serious crimes.

Over 3,600 executions have taken place in Iran under Hassan Rouhani. Iran holds the world’s record on per capita executions and also the highest record on execution of women.

Earlier in October, the UN High Commissioner for Human Rights Michelle Bachelet condemned the execution on October 2 of Zeinab Sekaanvand Lokran, a juvenile offender. Ms. Sekaanvand was convicted of murdering her husband in 2012, when she was 17 years old, but her claims that she was coerced into confessing to the killing, and that she had been a victim of domestic violence, were reportedly not adequately examined during her trial. She was executed despite a number of appeals from UN Special Rapporteurs and the UN Secretary-General since her conviction in October 2014.

Ms. Sekaanvand’s family was given one day’s notice of her execution, for a final visit, something that is among the UN concerns. The 65th resolution of the UN expresses concern at the continuing disregard for internationally recognized safeguards, including executions undertaken without notification of the prisoner’s family members or legal counsel.

The United Nations General Assembly called on the Iranian regime to abolish, in law and in practice, public executions.

UN High Commissioner for Human Rights Michelle Bachelet also stressed that the UN Human Rights Office opposes the use of the death penalty in all circumstances, as no judiciary in any part of the world is mistake-free.

Ms. Sekaanvand was the 84th woman to be executed while Rouhani is in office. The 85th woman was executed on November 13, 2018, in the Central Prison of Sanandaj. Sharareh Almassi, 27, had been in jail for five years. Her execution also took place despite protests and appeals by civil and human rights activists who had gathered after midnight outside the prison to prevent her death.

The UN also called upon the clerical regime in Iran to “ensure, in law and in practice, that no one is subjected to torture or other cruel, inhuman or degrading treatment or punishment.”

However, there have been numerous cases of cruel, inhuman and degrading treatment of prisoners in Iran, two vivid examples being the mistreatment and beating of Sufi women incarcerated in the Qarchak Prison in Varamin since February, and the beating and illegal exile of human rights activists Atena Daemi and Golrokh Iraee in January from Evin Prison to Qarchak which was reversed only after 81 days of hunger strike by Golrokh Iraee.

The 65th UN resolution also urged the Iranian regime to cease “the widespread and systematic use of arbitrary detention,” and to ensure “fair trial standards, including timely access to legal representation of one’s choice from the time of arrest through all stages of trial and all appeals.”

Hundreds of Iranian women have been arbitrarily arrested over the past year. In a statement issued on September 3, 2018, over the arbitrary detentions of human rights lawyers and women’s rights activists including Hoda Amid and Najmeh Vahedi, Amnesty International said, “These latest arrests are a blatant attempt to silence those advocating for human rights in Iran.” The statement further stressed that “the human rights situation in Iran has reached crisis point.”

Amnesty International pointed out in its statement, “The arrests of human rights lawyers are part of an attempt by the authorities to prevent them from being able to defend their clients, who are often human rights defenders or individuals who face the death penalty, including for crimes committed as a child.”

The United Nations has also called upon the mullahs’ regime “to release persons detained for the exercise of their human rights and fundamental freedoms, including those who have been detained solely for taking part in peaceful protests, to consider rescinding unduly harsh sentences, including those involving the death penalty and long-term internal exile, and to end reprisals against individuals, including for cooperating or attempting to cooperate with the United Nations human rights mechanisms.”

The regime has been handing down heavy verdicts for students and activists who took part in protests over the past year.

Poor prison conditions and practice of deliberately denying prisoners access to adequate medical treatment which creates a consequent risk of death, were also among the issues raised in the UN resolution.

Political prisoner Zeinab Jalalian is among those who has been denied medical treatment for ten years as a way of torturing and forcing her to make false confessions. Sufi women imprisoned in Qarchak Prison, and Atena Daemi in Evin Prison have also been denied access to medical treatment which has deteriorated their health conditions.

Specifically in article 16, the UN General Assembly resolution strongly urged the regime in Tehran to eliminate, in law and in practice, all forms of discrimination and other human rights violations against women and girls, including with respect to the right to freedom of movement, the right to enjoyment of the highest attainable standard of physical and mental health, the right to freedom of religion or belief and the right to work, to take measures to ensure protection for women and girls against violence and their equal protection and access to justice, to address the concerning incidence of child, early and forced marriage, as recommended by the Committee on the Rights of the Child, to promote, support and enable women’s participation in political and other decision-making processes, and, while recognizing the high enrolment of women in all levels of education in the Islamic Republic of Iran, to lift restrictions on women’s equal access to all aspects of education and women’s equal participation in the labour market and in all aspects of economic, cultural, social and political life.

The world’s highest body in charge of protecting human rights also urged the regime in Iran to eliminate, in law and in practice, all forms of discrimination and other human rights violations against persons belonging to ethnic, linguistic, recognized or unrecognized religious minorities or other minorities, and expressed serious concern about ongoing severe limitations and restrictions on the right to freedom of thought, conscience, religion or belief.

The Women’s Committee of the National Council of Resistance of Iran takes the opportunity of the Human Rights Day to draw attention to the dramatic plight of women in Iran and call upon human rights and women’s rights advocates to take action to compel the clerical regime to observe women’s rights and unconditionally release those women arrested and imprisoned for taking part in peaceful protests or for exercising their rights to freedom of speech.