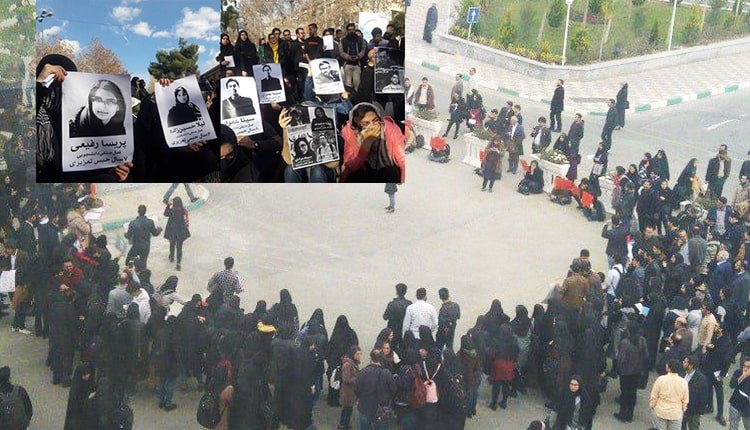 Iranian students staged a number of protest gatherings on the occasion of Student Day, on Sunday, December 9, 2018, at different universities across the country.

In the protest gathering of Iranian students held on the campus of the University of Tehran, a female student spoke out about the pain and suffering of Iranian women under 40 years of discrimination in a street theater.

In the protest gatherings of Iranian students at the Allameh Tabataba’i University and Shamsipour Technical College in Tehran, student protesters announced their support for Ahvaz Steel and Haft Tappeh Sugarcane workers.

Tehran Technical College students held a demonstration while chanting the slogan of, “Students will die, but will not accept tyranny.”

In their protest gathering, Ahvaz University students read out a statement in support of the workers and other sectors of the society.

On Monday, December 10, 2018, a major protest gathering at the Khomeini International University in Qazvin was held to protest against the problems Iranian students face in this university.

In addition to the protests held by Iranian students, Ahvaz Steel workers continued their demonstrations on the streets of the city on Monday, December 10, 2018, with the brave women of Ahvaz at the forefront.

During the protests of Ahvaz Steel workers held on Sunday, December 9, 2018, security agents attempted to arrest a young girl and take away her mobile phone, but the protesting workers forced the agents to stop the arrest of the protesting girl and let her go.

On Monday, December 10, 2018, the defrauded women depositors of the Caspian Credit Institute in Rasht held a protest rally, chanting slogans against Rouhani and demanding back their plundered assets.