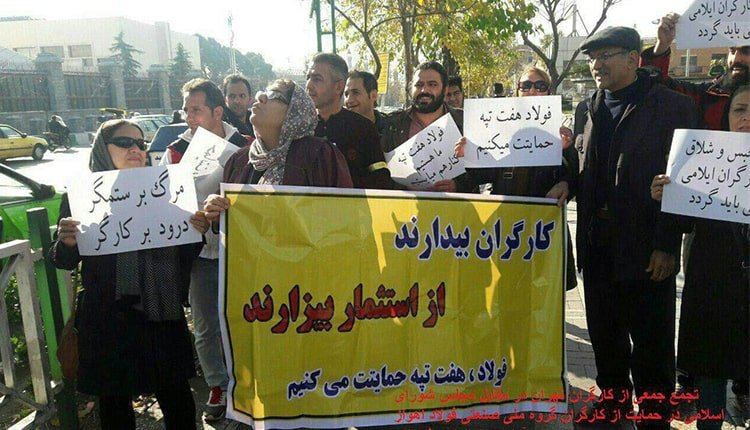 Ms. Parvin Mohammadi, the deputy chairman of the Free Trade Union of Iran Workers, spoke to the gathering in support of the Ahvaz Steel and Haft Tappeh workers’ protests.

Ahvaz workers continued their strike on the 32nd day on Tuesday, December 11, 2018, by gathering in front of the National Bank. Women’s participation was prominent in this protest. They chanted, “Inflation, high prices, Rouhani answer!”

Also on Tuesday, December 11, 2018, a group of defrauded creditors of the Caspian Credit Institute gathered in front of the Public Prosecutor’s Office in Tehran and staged a protest against the plunder of their investments.

On the same day, a group of Iran Air flight attendants gathered outside the Ministry of Roads and Urban Planning in protest against their working conditions and the company’s lack of attention to their frequent requests over the past years.

On Monday, December 10, 2018, a group of young graduates gathered in front of the House of Government in Baharestan, Tehran, to declare their protest against their unemployment. They chanted against Nobakht, the head of regime’s Planning and Budget Organization, saying, “Nobakht, come down, we will not leave this place until we get answers!” However, Nobakht only looked out from the window and did not respond to the protest gathering.

Also on Monday, December 10, 2018, several hundred brokers of the Agricultural Insurance Fund of Iran gathered in front of the regime’s Expediency Council and called for facilitating the recruitment plan. (The state-run ILNA – December 10, 2018)