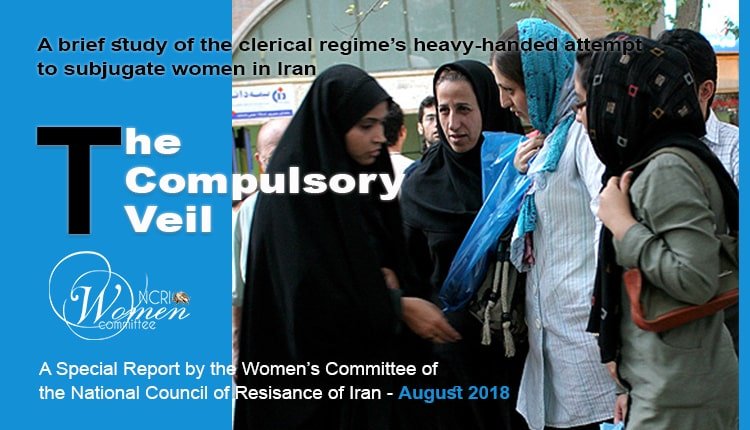 The compulsory veil, a brief study of the clerical regime’s heavy-handed approach to subjugate women in Iran

All rights reserved. No part of this publication may be reproduced or transmitted in any form or by any means, electronic or mechanical, including photocopy, recording, or any information storage and retrieval system, without permission in writing from the publisher.

A personal choice or a tool for oppression?

For thousands of years in Iran, women’s clothing and covering was a matter of personal choice, a social issue that was never deemed as a privilege. Iranian women made their choice on wearing the Hijab and covering their hair and body depending on their own tendencies and the culture in which they were brought up.

The past century, however, saw Iranian dictators and specifically the mullahs’ regime transforming this issue into a leverage used for imposing pressure on women and oppressing them.

This came in the heels of a 40-day trip to Turkey by Reza Shah and his prime minister, Mohammad Ali Foroughi, in 1935 when they got acquainted with a number of “manifestations of western civilization.” Among the things they took back to Iran were a festival commemorating the millennium of Iran’s great poet, Ferdowsi; foundation of a school called Farhangestan-e Iran to promote Iranian culture; foundation of Tehran University; transformation of men’s hats to Chapeau, and banning women from wearing any form of veil.

In order to impose the mandatory change of hat on men, the regime of Reza Shah had to violently crack down on protesters on July 12, 1935, turning the protest at Goharshad Mosque in Mashhad into a bloodbath. Eight months later, when the order for mandatory removal of the veil was issued on March 5, 1936, there was not much of a public resistance against the dictate fearing another bloody massacre. Opponents of the change in men’s hats and the removal of veils went into hiding and refrained from appearing in public to stay away from harassment and arrest.

Five years later, when Reza Shah was succeeded by his son, Mohammad Reza Pahlavi, in 1941, widespread public protests forced the new dictator into repealing the law.

The next dictatorship, the mullahs’ clerical regime, however, made a round turn on the issue of Hijab after seizing power with the 1979 Revolution that deposed the Shah.

The mullahs’ reactionary outlook and interpretations of Islam, including the compulsory veil for women, were made into law and institutionalized in the country’s Constitution and other legal codes.

The country’s justice system as well as all the intelligence, security and military apparatuses were subsequently ordered to enforce and protect the mullahs’ fundamentalist principles.

This process – in diametric opposition to all principles and teachings of genuine Islam — started from the very early days when Khomeini, the founder of the clerical regime, took the reign. The compulsory veil has continued to be enforced for nearly 40 years without succeeding to subdue ubiquitous opposition to it, since Iranian women and the entire Iranian society have never succumbed to the mullahs’ illegitimate laws and inhuman conducts, showing their repugnance in various forms and at every opportunity.

Such overwhelming opposition to the compulsory veil has become a nightmare for the regime. The Office of Cultural Studies of the Research Center of Majlis (the mullahs’ parliament) published a special report on July 28,  2018, stipulating that only 35 percent of Iranian women value the compulsory veil (Chador), and nearly 70 percent of women either do not believe in it or are among “the improperly veiled” and protest the compulsory veil in Iran.

Unemployment rate of Iranian women rises from 17 to 32 percent