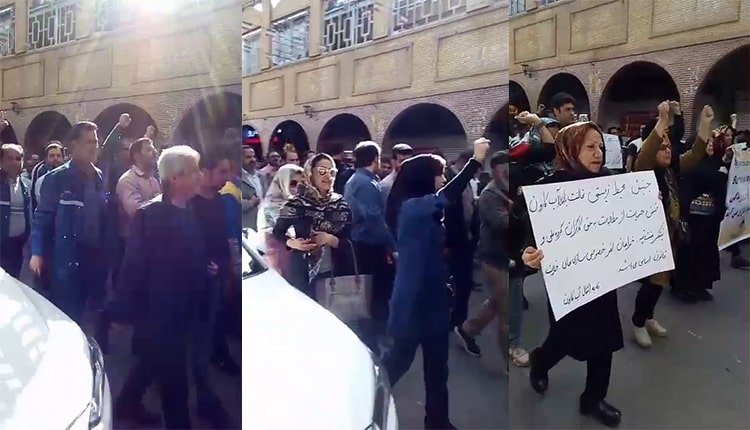 Brave women of Iran were at the forefront of the 36th day of demonstrations and protests by steel workers in Ahvaz. On Saturday, December 15, 2018, when the anti-riot forces intended to stop the workers’ march by blocking the road, the steel workers of Ahvaz managed to overcome the barriers and continue their march in the streets by remaining united and by brave women leading the way.

In another act of protest on Thursday, December 13, 2018, in the city of Hamadan, male and female teachers expressed their protest at the increasing pressures on teachers. They held posters against the state-run television and radio networks (IRIB) stating, “Why haven’t the teachers’ protests ever been covered even once?”

The aware students of Hamadan also joined their teachers’ protest.

In another act of protest also on December 13, defrauded creditors of the Caspian Credit Institute in Kerman held another protest against losing their deposits. They chanted, “Iranians, rise up and uproot tyranny and plunder.” Brave women played an active role in this protest.

At the Islamic Azad University – Najafabad Branch, students protested against the poor quality of food and lack of facilities at the university. Students say they have to pay several million toumans for every term, but they do not have access to the minimum facilities and services worth half that amount.

Students have held 280 protests from March to November 2018, with young brave women playing active role in all of them.