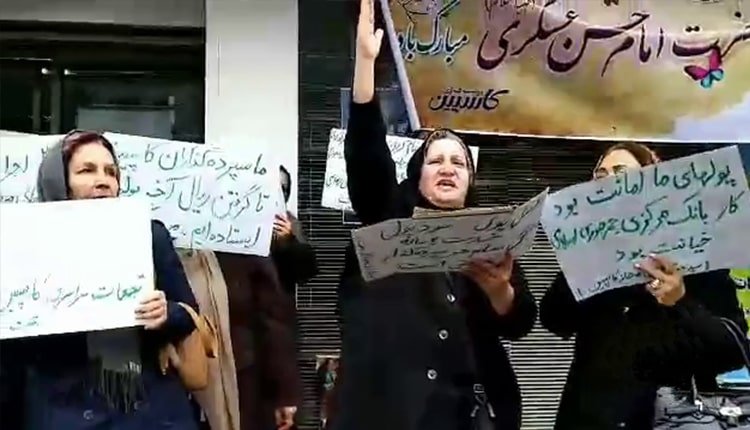 A group of retired women and men from the Medical Sciences University of Ahvaz, held a protest on Sunday, December 16, 2018, in front of the university’s central building in protest against non-payment of their bonuses for the years they served. The representative of these retired women and men said they had not received their bonuses as well as their paid vacations from 2016 to 2018.

Another protester from among the retired women and men said since in the present circumstances the value of Iran’s currency is continuously falling, such delays in the payment of bonuses cause a lot of problem. We used to have purchasing power in the past years, to buy lands or make investments, but today, our money has become worthless compared to two years ago. (The state-run ILNA news agency – December 16, 2018)

Also on Sunday, a group of defrauded creditors of the Caspian Credit Institute held a protest gathering outside the Court for Monetary and Banking Crimes in Tehran.

On Monday, December 17, 2018, investors plundered by the Caspian Institute in Rasht gathered outside Caspian’s Sarparasti branch and expressed their protest. Most of the participants in this protest were women. They chanted slogans in support of the workers arrested and detained in Ahvaz as well as in support of other prisoners. They demanded their release. Among their chants was, “The thieves are at large, while those who say the truth are being hanged.”

They also called for the unity of all sectors of society.

On Sunday, December 16, 2018, a group of students of Urmia University held a protest against the low quality of food in the university’s cafeteria. The university receives high tuitions from students every semester, but does not provide the minimum services to them. Every day, Urmia students hold protests against lack or low quality of services in this university.

On Saturday, December 15, 2018, unemployed women and men in the city of Behbahan, in Khuzestan Province, held a protests in the Phase Two Refinery against fraud and corruption in employment of new personnel by this refinery.

In another act of protest on Saturday, a group of shop owners and businessmen gathered outside the Ministry of Roads and Urban Development, demanding that the development plans of Tehran University be halted.