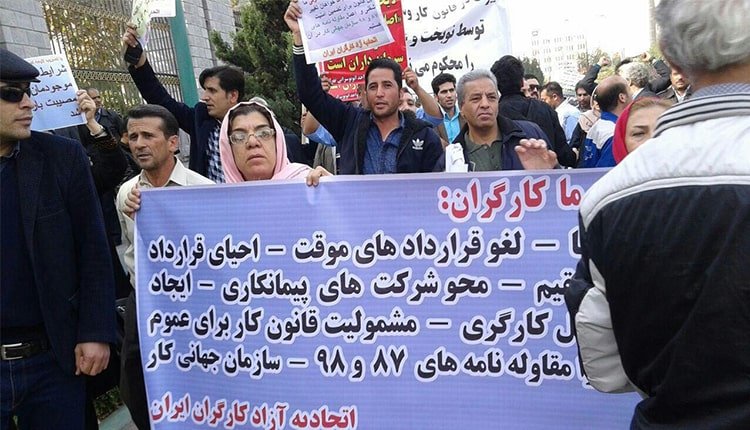 In an open letter published on December 20, 2018, Ms. Parvin Mohammadi, former representative of workers of Iran Metal Industries and member of the Board of Directors of the Free Union of Iranian workers, harshly criticized the regime for raiding the residences of protesting Ahvaz Steel workers after midnight and arresting them at home.

The translated text of Ms. Mohammadi’s letter appears below:

Shame on the rulers who responded with arrests and imprisonments to 38 days of cries of the steel workers of Ahvaz who demanded their rights.

The workers of the National Steel Industrial Group were able to awake everyone’s conscience in 38 days. They were able to attract the support of all workers and every honorable and freedom loving human being in Iran and the world.

These workers cried out their pains every day on the streets. Their throats turned sore so much that they cried out for their rights.

They held gatherings in front of every government agency and (appealed to) every faction in charge of the city and province of Khuzestan.

This mafia won windfalls in the aftermath of the 1979 revolution when the state confiscated (the factories and industrial complexes) and turned them into different foundations. Then the foundations were transferred to persons who had ties to those holding power and the country’s wealth, and eventually destroyed them all together.

With their jobs and livelihoods in ruins, workers have no way but to defend the last remaining breaths of the production cycle just to sustain their survival.

But the rulers who are accomplices to the mafia of wealth and power, most shamelessly raided the houses of steel workers after midnight, before the eyes of millions of people in Iran and around the world, arresting dozens of workers who were fed up with poverty and had only demanded their rights.

And two days later, they entered the company like conquerors and most brazenly asked workers why they had not referred to them to solve their problems. They claimed that if workers had not protested for 38 days, such incidents would not have happened and the company’s problems would have also been solved!

Gentlemen, you arrested and incarcerated (some workers). From now on, however, what will you do with the rage and fury of thousands of steel workers and their families and millions of workers and toiling wage earners across the country whose lives have turned into hell at your hands?

Of course, oppressors take to the extremes when they reach the point of insatiable greed and they can no longer think reasonably.

Gentlemen, if the arrests and imprisonments of dozens of steel workers have put them in a position to stop their street protests for several days, you should rest assured that this is not the end of it.

Because these are only moments and days when the rage and fury of steel workers and all workers throughout Iran are accumulated to soon erupt like a giant volcano.

Parvin Mohammadi, former representative of workers of Iran Metal Industries and member of the Board of Directors of the Free Union of Iranian workers