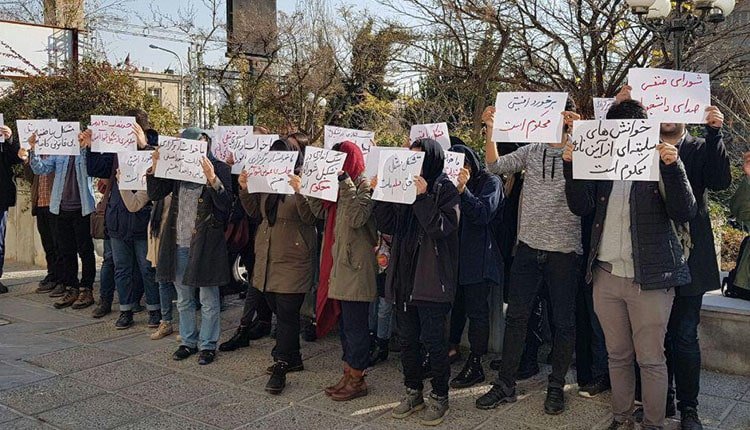 On Tuesday, December 25, 2018, the defrauded clients of the Caspian Credit Institute in Rasht held a protest gathering in front of the company’s Golsar Branch in the city. Women of Rasht are the main participants in these protests.

Previously, on Monday, December 24, 2018, the plundered depositors of the Caspian Credit Institute in Tehran once again gathered in a protest rally.

On Sunday, December 23, 2018, the defrauded clients of the Caspian Credit Institute in Mashhad held a protest gathering in front of its Pamchal Branch in this second largest city of Iran. Women had prominent presence in these protests.

On December 22, 2018, the plundered buyers of the Sapia and Iran Khodro Company gathering in front of the Consumer Protection Organization in Tehran and protested against the non-delivery of Saipa’s registered vehicles.

On Tuesday, December 25, 2018, nurses gathered in front of the regime’s parliament building in Tehran to protest against the nonpayment of their wages.

on Monday and Tuesday, December 24 and 25, 2018, the families of Ahvaz Steel workers who have been detained, gathered in front of the Ahvaz Governorate in protest to the arrest of their loved ones and called for the release of the hardworking workers. The families said, “Over the past 10 days, we have gone through all the legal ways for the release of our loved ones, but we did not get any results, and officials are not giving any answers other than false promises.”

On Tuesday, December 25, 2018, students of Tehran University held a protest rally in front of the Dean of Students in protest to the department’s hindering conduct.

On Sunday, December 23, 2018, the retired and working teachers in Tabriz gathered in front of the Department of Education in East Azerbaijan and protested against the deteriorating livelihood and economic situation.

Women actively participated in all of the above protests.

On the same day, a group of elementary students from the village of Tang-e Rulag in Dana County, Kohgiluyeh and Boyer-Ahmad Province, left their school in protest to the lack of gas for school classrooms. They wrote on their banners: “We are protesting, we need gas” and “Zahedan condolences, save us before we burn.”

On December 22, 2018, teachers in Kermanshah held a rally in protest to the burning of school children in the Zahedan school fire and expressed their support to the innocent children who burned in the fire. Women teachers actively participated in this protest.

On the same day, a group of families of farmers in the city of Varzaneh, in Isfahan Province, took to the streets and marched in the city in support of the farmers who demand their share of water.