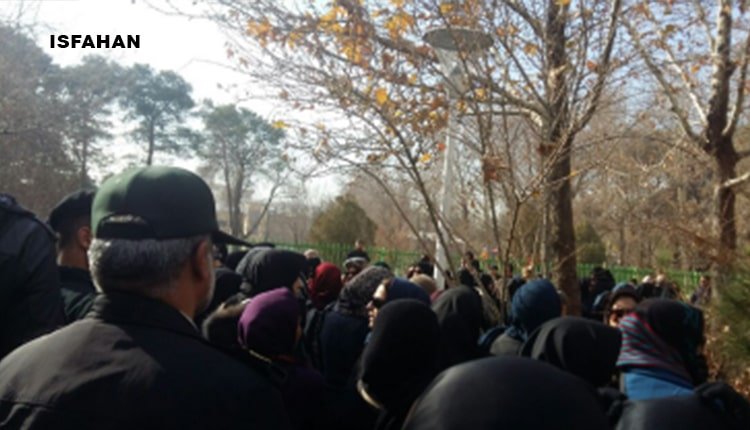 Thursday, December 27, 2018, the teachers and educators of Isfahan and Urmia held protests against low salaries and imprisonment of teachers. Women had extensive participation in these protests and gatherings.

Anti-riot guards had already been stationed in the area.

Isfahan’s teachers and educators confronted the suppressive state security forces and anti-riot guards with chants against injustice, and calling on fellow citizens to join them.

The righteous demands of the teachers were responded by tear and pepper gas. Anti-riot guards arrested some 40 to 50 teachers, including a number of women, and took them to an unknown location. There has been no information yet on the names of the arrested teachers.

The regime agents attacked anyone who carried a mobile phone in a bid to prevent taking pictures of the gathering and the regime’s clampdown. The anti-riot guards pulled off the chador of one of the women teachers who held a mobile, but she managed to escape as other teachers and passersby intervened.

On the same day in Urmia, capital of West Azerbaijan Province in northwestern Iran, working and retired teachers also held a protest upon a previous call outside the Department of Education in this city.

Iranian teachers and educators have staged three major nationwide protests this year in May, October and November. Women have always had a prominent presence in all teachers’ protests.  A number of teachers including women have been arrested in the course of these protests.

Iranian women have participated and played an active role in at least 850 protests by various social sectors since March 2018.