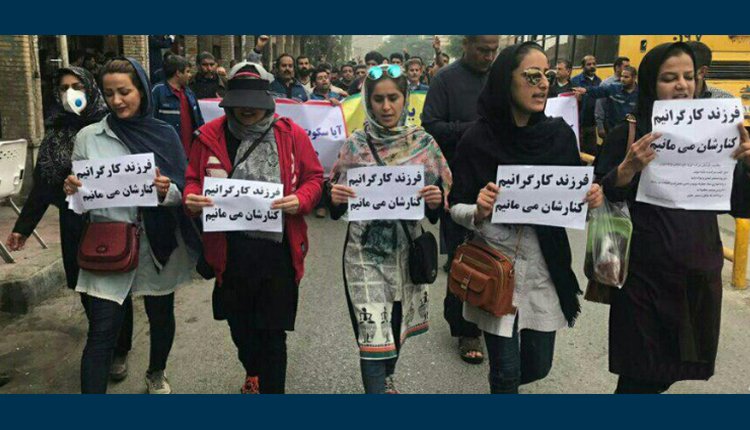 A year into the uprising, it is befitting to have a glance on women’s role in a year of persistent protests in Iran.

On December 28, 2017, some 10,000 people took to the streets of Mashhad to protest against skyrocketing prices while the general public’s purchasing power was next to nothing.

Women were numerous, loud and active in the protest. Eyewitnesses described women’s role in the demonstration as admirably courageous.

The protest in Mashhad sparked a year of persistent anti-government uprisings and protests across Iran bringing ever closer the prospects for regime change and the overthrow of the misogynist theocratic rule of the mullahs.

On the second day of the protests, a daring scene was created by a woman in the western Iranian city of Hamedan. For the first time in the protests, she shouted “death to Khamenei” right into the face of security forces surrounding her and then repeated it a couple more times before being whisked away by a friend.

Women’s role at the forefront

Throughout the past year since last December 28, women have been at the forefront and in the center of most protests.

In the nine months since March, they have actively taken part in at least 850 protests compared to the 436 protests in 12 months the previous year where the presence and participation of women had been registered. Girl students have been actively involved in at least 300 protests since last December by participating in every student protest.

Despite great risks and intimidations, women have always been at the forefront of teachers’ protests. On May 10, 2017, Iran saw the nationwide protests of teachers in 32 cities over low salaries, difficult living conditions, lack of insurance and other job benefits, as well as the non-payment of their past due wages for consecutive months.

The uprising in August

In August, Iranian women had their effective impact on the new wave of protests sweeping the country, so much that the Revolutionary Guard Corps was compelled to speak out. The state-run Fars news agency, the mouthpiece of the Islamic Revolutionary Guard Corps (IRGC), reported on Iranian women’s role as the driving force and engine behind the protests.

Fars reported, “In the riots of Karaj (the fourth largest city of Iran), 20 leaders were identified and arrested, the majority of whom were women.” (The state-run Fars news agency – August 5, 2018)

In another report, Fars also highlighted women’s role in leading the protests. “It is noteworthy that today, too, similar to the previous days, the leader of these people [the protesters] was a woman.” (The state-run Fars news agency – August 5, 2018)

Fars also pointed out that women’s role in the protests were “more dominant” and a similar situation was “noticeable and evident in the protests in other cities, as well.”

Women’s role was remarkable in all major uprisings and protests by different strata and in various cities.

Khuzestan: Women have been outspoken since March in the protests held by families of the arrested workers of the National Steel Group of Ahvaz, in the protests of defrauded clients of credit institutes, and in the month-long protests over insulting comments made against Arab Iranians on the state TV.

More recently in November and December, women provided a strong backing to the sugarcane workers of Haft Tappeh in Shush and the steel workers of Ahvaz in their month-long strike and protest marches.

Kazerun: Thousands of residents of Kazerun, in the southern Iranian Fars Province, including a remarkable number of brave women held consecutive protests against segregation of their city in April and May. They braved heavy presence of security forces and anti-riot units and marched in the city’s main square. They chanted, “We are fighting women and men, we fight against segregation.”

The state-run Sharq daily acknowledged women’s massive participation in these protests.   Farmers of eastern Isfahan have been protesting continuously to gain their share of water for farming from Zayanderood which used to be a copious river passing through Isfahan, but has dried up under the mullahs’ rule since its water has been diverted for military purposes to various compounds and facilities belonging to the Revolutionary Guard Corps (IRGC).

Borazjan: Major protests were held in June and July over water shortage in the city of Borazjan, the second largest city in the Province of Bushehr lying along the Persian Gulf coast. The people of Borazjan are dissatisfied with the situation of water in their city. Women’s role in protests of Borazjan against lack of water in hot summer days was significant and active.

Khorramshahr: Women of Khorramshahr protested against lack of clean drinking water by actively participating in the large scale protests by thousands of residents of this key port city of southwestern Iran for three days from June 29 to July 1, 2018.

Young men and women of Khorramshahr confronted the regime’s troops empty-handed. They chanted “death to Khamenei”, “death to Rouhani”, “death to the Islamic Republic”, “the mullahs must get lost.”

Mashhad: Women wore shrouds in a protest against the fraudulent Padideh Shandiz company in Mashhad on April 12, 2018. The protesters have not yet received any response on reimbursement of their properties after four years.

This brief review provides a perspective on Iranian women’s role in the uprisings over the past year. They have been present everywhere in every strata acting as the driving force.

Iran’s brave women started their fight against the tyrannical mullahs in 1979 only two weeks after they seized power, endured great suffering and made great sacrifices during the mass arrests and executions which began in 1981.

They have a brilliant record with thousands of women who gave their lives for Iran’s freedom. They have never given up their faith in victory and have earned their rightful place in the leadership of the Iranian Resistance.

So, a great potential has been saved for 40 years in the struggle of Iranian women which is going to expand with an enormous power like a compressed coil, and will uproot the ruling religious tyranny.

The women of Iran are resolved to turn the page of their country’s history in the 21st century and they deserve the support of all freedom-loving people of the world.