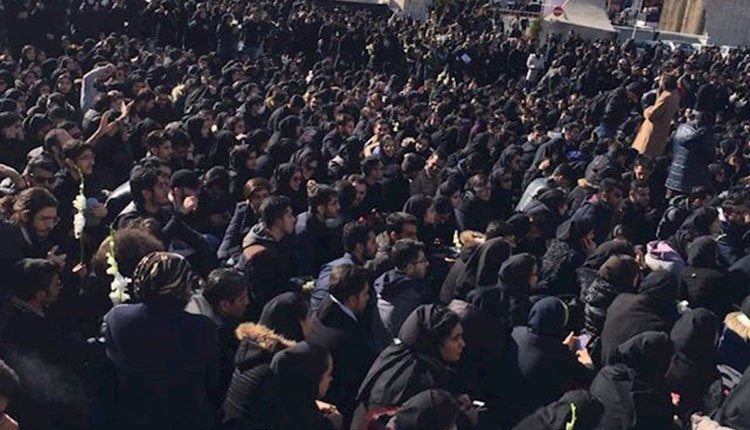 Azad University students held a memorial ceremony on Saturday, December 29, 2018, to commemorate their fellow students who died in a bus crash on Tuesday, December 25, 2018.

The ceremony was held following a previous call by Azad University students and despite deployment of a large number of security forces on the campus of the School of Sciences and Research of Tehran’s Azad University.

Thousands of Azad University students participated in this ceremony which featured the mothers of the students who lost their lives in the accident. Niloufar Radfar’s mother made daring remarks at this gathering.

During a powerful speech, Niloufar Radfar’s mother said, “My daughter lost her life. I will not give up until I have answers and get my daughter’s rights… Our children are martyrs of science. Stay by my side. Don’t leave me alone.”

During her speech, Azad University students chanted, “My martyred student, I will avenge your blood.”

No government officials attended the ceremony. After a few hours when a representative was sent, Azad University students turned their backs on him and chanted, “Turning our backs to the enemy, and facing our homeland!”

Azad University students issued a declaration in which they outlined their demands in 9 articles. The declaration was reported by the state-run Fars news agency. Among others, Azad University students demanded, “Resignation and apologies by the president of the Sciences and Research University and the president of the Azad University (i.e. Ali Akbar Velayati who is the foreign policy advisor to the mullahs’ supreme leader Ali Khamenei)”, “establishment of an emergency room on campus”, “renovation of the bus fleet and campus transportations”, and “installation of shields to protect landslides and guardrails along the road.”

Azad University students demanded urgent appearance of officials at their gathering, and announced that they will continue to gather until one a high-ranking official shows up. (The state-run Fars News Agency – December 29, 2018)

An Azad University bus overturned and crashed on Tuesday, December 25, 2018, on the campus of the Sciences and Research University, killing 10 passengers, including three young women, and injuring at least 28.

Azad University students continue to protest over deaths of classmates