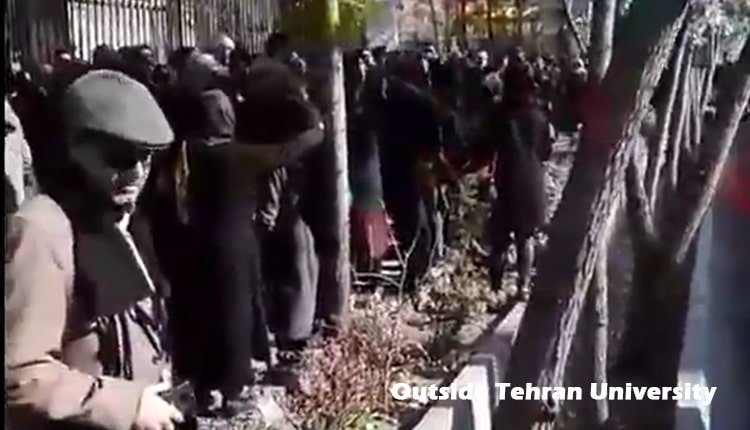 Tehran students held a major protest and march around 11.30 a.m. on Monday, December 31, 2018, outside the University of Tehran with chants of “death to the dictator.” The protest was against the deaths of ten students killed in a bus crash in the University of Sciences and Research of Azad University.

The State Security Force and anti-riot guards had been stationed since early morning outside Tehran University and in the surrounding streets to quell any protest by Tehran students. The regime had also dispatched plainclothes agents to take pictures from the protesters. The repressive forces intended to arrest Tehran students and prevent the protests but faced widespread defiance of the people in the scene. Tehran students called for resignation of the Azad University officials responsible for the deaths of students in the bus crash and described them as “incompetent.”

Tehran students also chanted, “Fear not, all of us are together” and “threats and jail are no longer effective.”

Eyewitnesses said most of the students participating in this widespread protest were young women who chanted anti-regime slogans. In one instance, security forces intended to arrest one of these women but were not able to do so when other protesters charged at them with chants of “let her go!”

On the same day, students of the University of Sciences and Research of Azad University of Tehran continued their protest to the deaths of ten of their classmates in a bus crash on campus for the third consecutive day by blocking the university’s main road. Agents of the university’s security department had blocked Danesh Square where the students had held two days of ceremonies and protests. In another act of protest, a group of University of Tehran students held a protest gathering at 10 a.m. on Monday, December 31, 2018, outside the Organization of Students Affairs against violations committed by the dean of students in this university. One of the protesting students said, the security department of the Students Affairs Organization had ordered them out of the building and locked them out, threatening to call the State Security Force to deal with them.