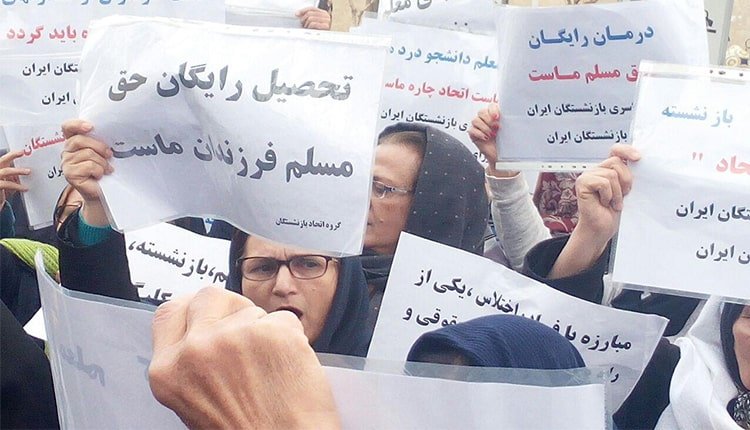 The country’s retirees held a massive protest across from the mullahs’ parliament in Tehran on Tuesday, January 2, 2019, demanding restitution of their rights. A considerable number of women participated in this massive protest. Security forces arrested two protesting retirees in order to control the scene but were confronted by the protesters shouting at them, “Let them go, let them go.” The protesters rushed to the help of the two men who were being arrested and unanimously chanted slogans.

The retirees participating in the massive protest chanted against injustice and discrimination, called for unity of all social strata.

On the same day, another group of retirees held a massive protest in Mashhad against the authorities who have not responded to their demands. On Wednesday, January 2, 2019, a group of defrauded clients of Shideh Company held a rally to protest swindling of their properties. The company, affiliated with the Aviation Organization, had sponsored a 1100-unit project and another 4000-unit project but has not delivered the housing units to their buyers after 10 years.

On the same day, a group of workers and employees of the Khomeini Hospital in Karaj held a massive protest in protest of their wage payment delays. They have held similar protests for consecutive times. Qassem Taheri, Vice Chairman of the Islamic Labor Council at the hospital, said, “We have not received between 7 and 8 months of our wage demands. In today’s gathering, apart from trying to bring our demands to the attention of the authorities, we want to show our solidarity with the workers of Ahvaz steel, Haft Tappeh Sugarcane, HEPCO, and Agh Darreh. (The state-run ILNA news agency – January 2, 2019)

On Wednesday, January 2, 2019, the families of the arrested workers of the National Steel Group of Ahvaz staged a protest and demanded the release of their loved ones.

At the same time, the families of the farmers in Isfahan joined the massive protest of the hardworking farmers of Varzaneh in a protest gathering on Wednesday, January 2, 2019. On Tuesday, January 1, 2019, a group of defrauded clients of the Caspian Credit Institute in Rasht, mainly consisted of brave women, held a protest gathering and called on the authorities to meet their demands. They chanted slogans against Rouhani’s deceptive government and chanted, “The motto of every Iranian is death to Rouhani.”