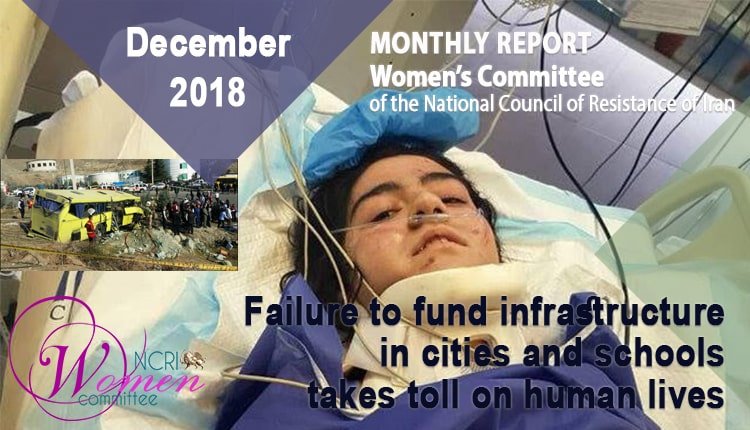 While the Iranian regime spends billions of dollars on the wars in Syria and Yemen, and on missile tests and terrorist activities, little budget is allocated to the country’s infrastructure and education while accidents essentially caused by a lack of funds continue to take toll in Iranian schools and universities and on the country’s roads.

NCRI Women’s Committee Monthly Report – December 2018 reviews the accidents in universities and roads to shed light on this damage caused by an illegitimate regime to the human and material resources in Iran.

Three pre-school and elementary girl students lost their lives in a fire on Tuesday, December 18, 2018, at a non-governmental girls’ school in Osveh Hassaneh in Zahedan, capital of Sistan and Baluchestan Province in southeastern Iran. The accident was due to the use of non-standard oil heaters in the school.

The Department of Education in Sistan and Baluchestan Province announced the names of the three pre-school girl students as Mona Khosroparast, Maryam Nokandi, and Saba Arabi. (The state-run Tasnim news agency – December 18, 2018)

Two days later, a fourth girl, Yekta Mirshekar, who had suffered 70 percent burns, died at the hospital on Thursday, December 20, 2018.

At noon on Tuesday, December 25, 2018, a bus belonging to the Sciences and Research School of the Azad University of Tehran, was taking students from schools located on heights down to the university’s entrance, when it veered off a steep, mountainous road, rolling over for some 90 meters and crashing into a concrete wall of the water system.