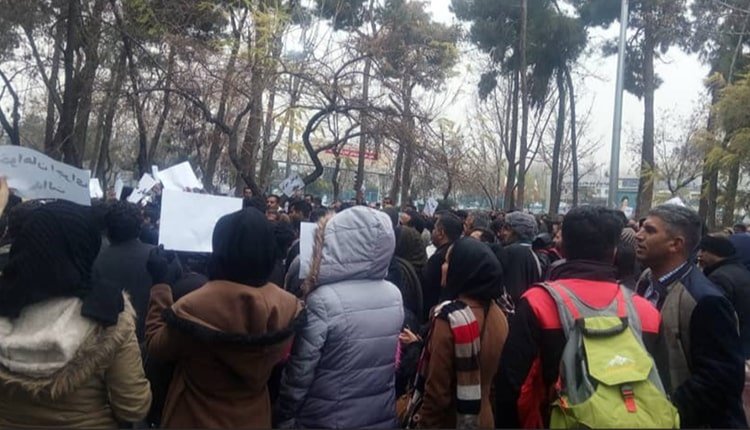 Protests in Iranian cities and active role of women in them

Women played active role in all Iran protests including in Tehran, Ahvaz, Behbahan and Sabsevar during the weekend, Saturday, January 5, and Sunday, January 6, 2019.

Employees of the Agriculture Insurance Fund converged in Tehran on Sunday, January 6, 2019, from all across the country and held a protest gathering outside the National Employment Organization. Several thousand employees of the Agriculture Insurance Fund are working without any form of job security or insurance. They demand that the government expedites its recruitment and determine their employment status. (The state-run ILNA news agency – January 6, 2019)

In another one of the protests on Sunday, a group of people protesting employment examination at Bid-Boland Refinery in Behbahan, gathered outside the city’s great mosque, expressing their demands.

A group of disabled people held a gathering outside the mullahs’ parliament in Tehran on Sunday, January 6, 2019, and demanded implementation of the law on disabled people. The families of imprisoned workers of Ahvaz Steel Complex gathered again outside the Governorate of Khuzestan in Ahvaz on Saturday, January 5, 2019. They have been gathering repeatedly for consecutive days over the past two weeks to demand freedom of their loved ones.

In one of the protests, a group of customers of Iran Khodro, Saipa, Bahman Motor, and Saipa Citroen companies gathered outside the General Prosecutor’s Office in Tehran in protest of the high prices offered by these companies on Saturday, January 5, 2019.

Students of Hakim Sabzevari University in Sabzevar lined up their food trays on the ground on Saturday, January 5, and held a gathering outside the university’s cafeteria to protest the low quality of food and conduct of the dean of students.

In another act of protest, 34 student associations signed a letter addressed to the Minister of Intelligence, declaring their support for Ismael Bakhshi and his call on the Intelligence Minister to participate in a public debate on television. Ismael Bakhshi is a labor activist representing workers of Haft Tappeh who was imprisoned in November and tortured before being released to be detained at home.

The students wrote to the Intelligence Minister, Seyed Mahmoud Alavi, that they expect the regime to provide the opportunity for a worker to criticize the government and demand accountability as a citizen. The student associations also declared their readiness to host the debate.

On Friday, January 4, 2019, a group of graduate students of Zanjan University held a gathering to observe the birthday of their fellow classmate, political prisoner Payam Shakiba, and demand his freedom.

On the same day, a group of residents of Sistan and Baluchestan Province performed a symbolic act in protest to the water crisis in this province and expressed their protest.