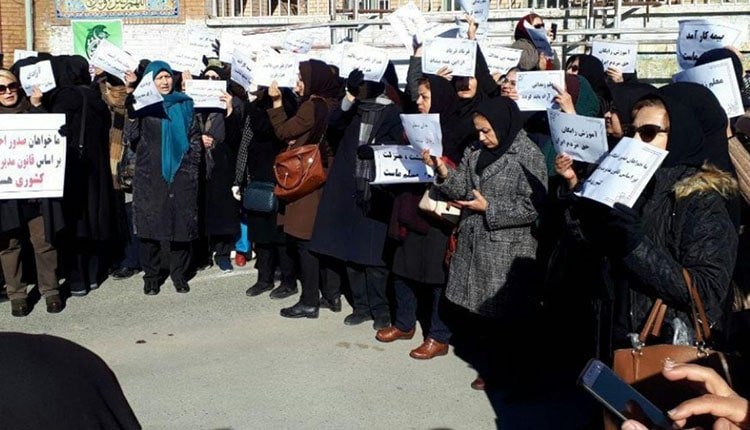 Teachers and educators in Kermanshah and Ardabil gathered on Thursday, January 10, 2019, in front of the Department of Education to protest against the regime’s lack of response to their demands to raise their low salaries. They chanted, “The government betrays, the parliament supports it.”

On Wednesday, January 9, 2019, teachers and educators in Isfahan gathered outside the Department of Education in Isfahan and staged a protest.

Teachers and educators held their protest rally in Isfahan while police forces on motorcycles were deployed to the streets to prevent their protest.

The security forces threatened the teachers and educators and said that “You have slapped us. So, you have to take the attacks and threats.” But in response to the State Security forces who had gathered to suppress the rally, the brave teachers responded that the SSF is the one to face justice for cracking down on innocent people.

A few hours later, teachers and educators gathered again under the rain in the Revolution Square of Isfahan, in protest of their low salaries and the regime’s failure to meet their demands.

The teachers and educators of Isfahan have rallied and demonstrated several times in the past months to demand their rights but have not received any suitable response except suppression and arrests. On Thursday, January 10, 2019, defrauded clients of Padideh Shandiz financial institute held a protest in Mashhad outside the Governorate building demanding that their assets. On Tuesday, January 8, 2019, the defrauded clients of the Caspian Credit Institute in Rasht, gathered in front of the office of the institute in a protest gathering which consisted of brave women. They demanded the return of their lost assets. They chanted, “We have run around for three years and only heard threats.”

On the same day, buyers and owners of automobiles including Saipa, Brilliance, Pride L90 and etc. gathered at the car exhibition in Tehran to protest against the failure to deliver their vehicles.

The death on Friday, January 4, 2019, of a woman in the cold in front of the City Council made the people of Shiraz sorrow. On Monday, January 7, 2019, members of the Vahdat Institute in Mashhad gathered in front of the city’s governorate in protest to their unemployment.