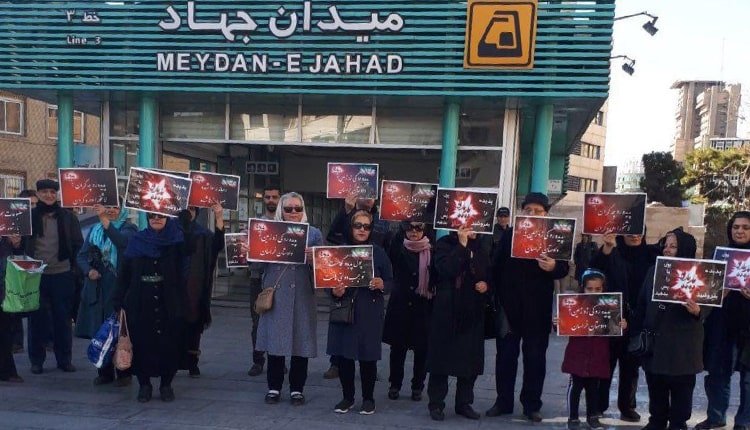 Women participate d in the protest held on campus by students of Shiraz University of Medical Sciences on Saturday, January 12, 2019, against privatization of medical science educational institutions. Women participated in significant numbers in this protest gathering.

A group of employees of the Arman Credit Institution (Vahdat Cooperative) gathered outside the mullahs’ parliament building in Tehran also on Saturday, January 12, 2019, to protest against their own and their colleagues’ dismissals.

In another act of protest, a group of teachers in Iran expressed their support for labor activist Ismail Bakhshi and protested the widespread wave of crackdown on civil and guild activists. Citing examples of torture, beatings and insults to teachers held in custody, they said that they believed Ismail Bakhshi’s remarks about torture.

After the announcement of bankruptcy of the Ayandeh Bank and the flight of its CEO, a group of depositors in Yasouj gathered at the bank on Saturday, January 12, 2019, and demanded the bank to reimburse their deposits.

Also on Saturday, January 12, 2019, a number of buyers of registered vehicles from Saipa Diesel Company in Tehran held a gathering again at the company’s office along where women participated in the protest against the company’s failure to deliver their vehicles and fulfill their demands.

On Friday, January 11, 2019, the protesting buyers also gathered at the Tehran Car Exhibition in protest to car manufacturers’ failure to comply with Article 4 of the sponsor organization with regards to the prices announced for the sale of cars.

On Saturday, January 12, 2019, another group of registered car buyers from Bahman Khordo Company gathered at the office of this company, located at 13 km of Karaj Road and protested against the company’s failure to deliver their cars.

Earlier, on Thursday, January 10, 2019, plundered investors of Padideh company tied to the Ministry of Interior gathered at the Metro Station in Jihad Square, downtown Tehran, and protested defrauding of their assets. Women participated in this protest. They held placards which accused the government of stealing their money. They called for sale of the company to reimburse their funds.

Women participate d in all of the above protests.