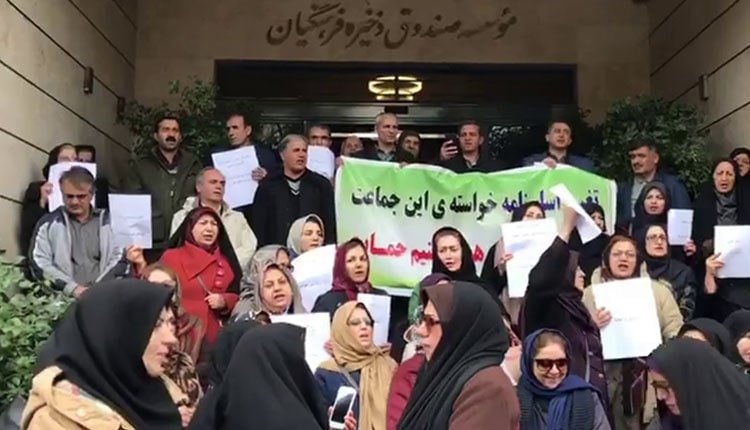 Teachers and educators in Tehran and Yazd, as well as the defrauded clients of the Caspian Credit Institute in Tehran and Mashhad held a number of protests on Sunday, January 13, 2019.

Retirees, most of whom were teachers and educators, held a protest gathering in the Vanak Square in Tehran on Sunday, January 13, 2019.

In addition to their wage demands, the retired teachers and educators demanded the release of imprisoned teachers. In the protest rally, they chanted, “Educators are awake and agitated by the embezzlers.”

In addition to the teachers, protest movements by the defrauded clients of the Caspian Credit Institute were held in the cities of Tehran and Mashhad. On Sunday, January 13, 2019, the defrauded clients of the Caspian Credit Institute held a protest rally in Tehran and simultaneously commemorated the death of one of the persistent participants in these gatherings. The ceremony and protest gathering were held in front of the Credit Institute’s office. The protesters held up placards that read, “We will not give up on our rights”.

Also in Tehran, the defrauded clients of Arman Vahdat Financial Institute gathered on Sunday across from the mullahs’ parliament and held a protest gathering.

At the same time, the depositors of the Badr Tous Financial Institute in Mashhad held a protest rally. They demanded the return of their assets and deposits.

On the same day, the defrauded clients of Caspian credit institute in Mashhad held a gathering outside the governorate’s office in this city and protested lack of payment of their original deposits.