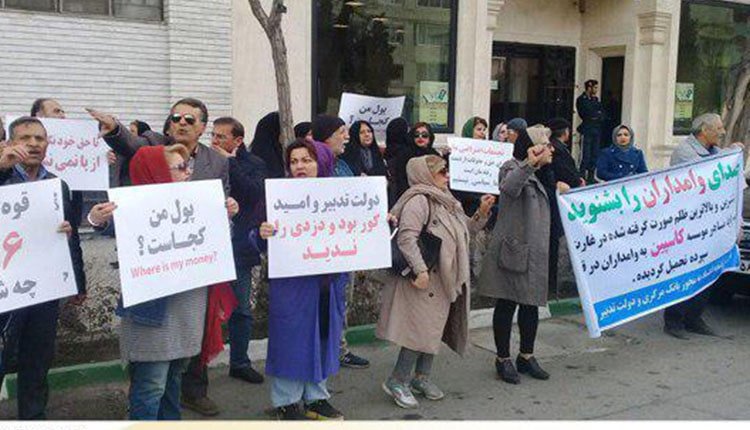 The continuous protests of different strata, including retirees and plundered credit depositors, continue in various cities of Iran with women actively participating. On Monday, January 14, 2019, protests were held in the cities of Tehran and Mashhad.

At the same time, in another gathering in Tehran, the plundered credit depositors of the Samen Credit Institute set up a protest in front of the Ministry of Justice and demanded the reinstatement of their assets.

Also, a group of buyers of registered vehicles from Saipa Diesel Company gathered at the Ministry of Industry, Mine and Trade in Tehran, and protested against the company’s failure to deliver their vehicles and fulfill their demands.

On Monday, January 14, 2019, in the wake of continuous protests in Mashhad, a number of plundered investors of the Caspian Credit Institute in Mashhad held a protest rally in protest to the looting of their assets. Based on the previous call, the plundered investors of the Caspian Credit Institute held this gathering in front of the Pamchal Branch of the Institute. The protesters chanted slogans against Rouhani and called him a charlatan liar.

In another development on Monday, January 14, 2019, during a ceremony at Gonbad-e Kavus in which Rouhani made a speech at the city’s stadium, the people of the city chanted slogans in protest to the high cost and the economic downturn. However, the organizers of the ceremony, who were afraid of hearing the slogan which showed the suffering of the people, blared loud music from the stereo bands that were set up for Rouhani’s speech.