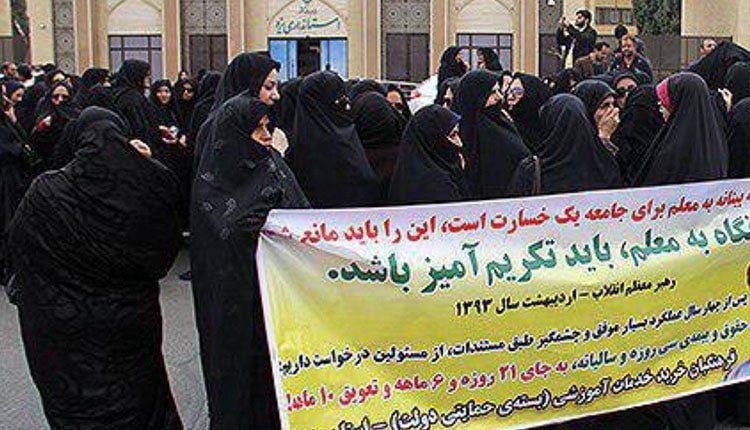 A group of hardworking teachers of support schools in Yazd Province held a protest rally on Tuesday, January 15, 2019, in front of the governorate to protest mismanagement of support schools and demand full payment of their salaries.

Ms. Molla Nouri, one of the female teachers participating in the protest rally, explained some of the problems the hardworking teachers of support schools in Yazd face. “Our salaries have not been paid since April. Teachers who have no children receive monthly salaries of under one million toumans and for each child (up to two children) 80,000 toumans is added to their salaries.”

Lack of job security and insurances are among the main problems hardworking teachers in the province of Yazd and the country as a whole.

Another teacher said that 70 percent of the hardworking teachers in Yazd Province are women and 30 percent are men. Currently, 54 schools operate in Yazd Province, but 20 of them have been closed because their teachers’ salaries have not been paid. (The state-run ISNA news agency – January 15, 2019)

According to ISNA, support schools began working in 2014 by buying educational services from non-public schools to help provide education to more children in areas that have shortage of human force. On Tuesday, January 15, 2019, a group of defrauded investors of the Caspian Credit Institute in Rasht held a protest rally opposite the institute’s office, demanding the return of their assets. The brave women in Rasht are the main participants in these protests. On Monday, January 14, 2019, the plundered investors of Pardisban held a rally in protest against the company’s scam. After four years, the case filed by the plundered clients of the company has been left with no response due to lack of action by the Judiciary.

About 5 years ago, after extensive advertisements by the state-run radio and television, people had registered in the Pardisban Company. About 6,000 people who bought shares from the company have lost their assets. The company sold shares in Tehran, but the largest shares were sold in Mashhad.