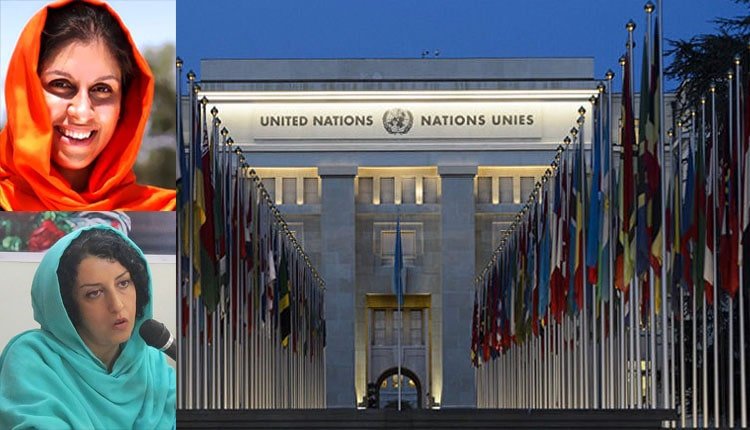 In a statement issued on January 16, 2019, the UN human rights experts said the situation of these two prisoners is dire and urged the Iranian regime to comply with its international obligations.

“We urge the Government to immediately and unconditionally provide Nazanin Zaghari-Ratcliffe and Narges Mohammadi with access to the appropriate treatment and care they have repeatedly requested in light of their serious health concerns,” UNSRs said in part of the statement.

Nazanin Zaghri-Ratcliffe, a project manager with the Thomson Reuters Foundation, was sentenced to five years’ imprisonment “for allegedly plotting to topple the Iranian government.” Her husband, Richard Ratcliffe has said that she has been denied appropriate health care by the Iranian authorities for lumps in her breasts, and numbness in her arms and legs.

Narges Mohammadi is suffering from a pulmonary embolism and has been in prison since 2015. She was sentenced to 16 years’ imprisonment.

In light of the hunger strike by the two prisoners, the UNSRs said, ” The authorities must urgently address the violations that are the basis of their hunger strike protest, including denial of appropriate treatment and care, which may well amount to cruel, inhuman or degrading treatment, or even torture.”

International human rights organizations have a clear position on human rights abuses in Iran and in particular on prisons and on women political prisoners, and support human rights in Iran.

Nevertheless, Abbas Jafari Dowlatabadi, Tehran Prosecutor said that the physical situation of Nazanin Zaghari-Ratcliffe and her statements about her conditions is prejudiced and the greatest attention is given to these convicts.