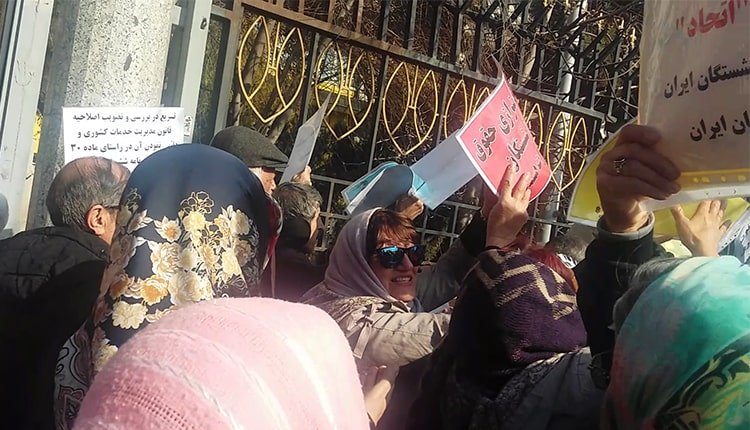 Retired government employees held yet another protest outside the Labor Ministry in Tehran on Tuesday, January 22, 2019, to demand their rights. Women’s presence was remarkable and they played an active role in the protest.

The retired government employees have held numerous protests in the past months but have not received any response from the country’s officials. 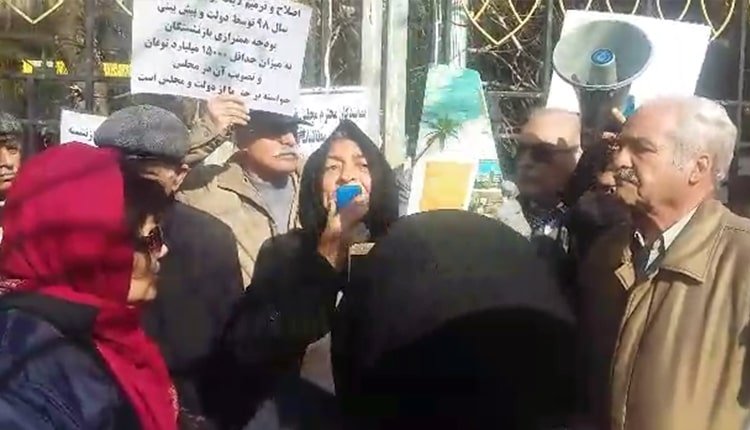 One of the brave women participating in the protest of retired government employees made a speech by a megaphone. Addressing government officials, she said, “Our baskets are empty. You give promises for (the next Iranian year) 98. But today, high prices, inflation, inefficient insurance, etc. have made life miserable for the retired government employees. You pledged but did not deliver. You receive astronomical salaries. Your astronomical salaries are what have impoverished all the people of Iran. You do not know anything of our situation and the situation of our children. The retired government employees have 26,000 children who have registered their names on your website. 26,000 people do not trust you. How many did you employ out of these 26,000 persons? Wow to you! Wow!”

The speech by this lady was applauded greatly by the participants who joined her in blaming the officials.

In another protest on Tuesday, January 22, 2019, the defrauded clients of the Caspian Credit Institute in Rasht held another protest gathering outside the IRGC-backed company’s Sarparasti branch in this city, demanding their plundered assets.

On Monday, January 21, 2019, the defrauded clients of the Caspian Credit Institute held a protest outside the company’s central branch in Tehran and chanted slogans against the government and the Judiciary who do not take any action in favor of the defrauded people.

Also on Monday, the defrauded clients of Badr Tous company, a sub-division of Caspian, in Mashhad, held a protest to demand reimbursement of their assets. They vowed not to back down until they get their money back.