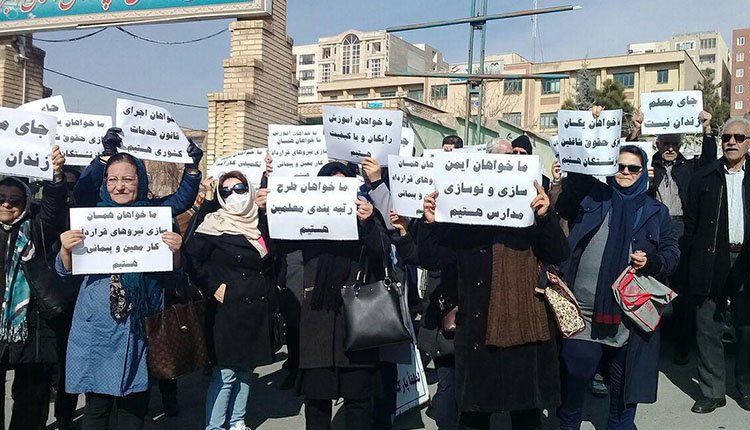 Teachers and educators across Iran stand up for their rights

On Thursday, January 24, 2019, a group of teachers and educators in Kermanshah held a protest rally in front of the governorate and called for their rights while chanting, “Free education is our absolute right”.

In Ardebil, teachers and educators gathered in front of the Education Department. They protested against the authorities’ disregard for their demands.

A group of teachers and educators in Isfahan also held a protest rally against the authorities’ failure to respond to their demands. They chanted, “Imprisoned worker and teacher must be a freed”.

Also in Khorramabad, a number of teachers and educators held a protest gathering to demand their rights.

In Karaj, educators and teachers gathered similarly in front of the city’s Education Department on Thursday, in protest to not receiving a response to their demands. On Thursday, January 24, 2019, a group of defrauded clients of the Padideh Shandiz joint-stock holding company in Mashhad, held a protest gathering at the city’s governorate building and called for the return of their assets and property.

On Wednesday, January 23, 2019, a group of retirees gathered in front of the Parliament building in Tehran for the second day in a row and demanded the reinstatement of their rights. During the retirees’ protest on Tuesday, January 22, 2019, one of the brave women participating in the protest made a speech against government officials. The speech by this lady was applauded greatly by the participants who joined her in blaming the officials.

A group of families of the Sanchi oil tanker collision victims held a protest rally on Wednesday, January 23, 2019, in front of the Presidential Administration building in Tehran.

On Wednesday, January 23, 2019, a number of buyers of registered cars from the Kerman Motor Company held several protest gatherings at the Ministry of Industry, Mine and Trade in Tehran, and demanded a response to their rights.

At the same time, a number of residents and workers of the Shemshak Ski Resort gathered in front of the Development and Maintenance of Sports Facilities building to protest against the closure of the track.