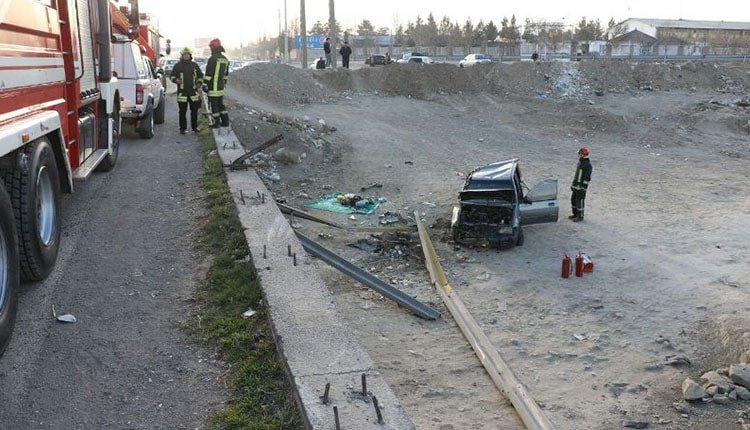 The car used for a school transportation in Mashhad overturned on the road. Three girl students and the female drivers of the car were injured and subsequently hospitalized.

Hassan Jafari, the executive director of the Fire Department in Mashhad, had an interview in this regard with the state-run ISNA news agency on Saturday, January 26, 2019. He said the accident had happened in the suburb of Mashhad near Manzelabad district.

Three girl students and a boy all of whom studied at an elementary school were riding in a Pride which veered off the road while passing over a bridge and overturned.

The three girl students and the school boy where in the car and their female driver were all injured. They were later taken to hospital.

Jafari said, “There have been 12,682 accidents and fire incidents in Mashhad so far this year which have been handled by the Fire Department.” (The state-run Asr-e Iran website, January 26, 2019) Definitely, the number of accidents are much higher than what is announced by the regime’s officials.

In October, the bus carrying girl students to a compulsory camp, called Rahian-e Noor, crashed on the Tabriz road. Two girl students died in the accident and more were injured. (The state-run ISNA News Agency – October 10, 2018)

In a similar incident last January, the car transporting students of a girls’ high school in northern Fars Province, turned over and the five girls riding in the car were wounded. The accident happened on January 22, 2018, when a Paykan carrying five teenage girls from Simkan village to their school in Kheirabad village, turned over on the road.

One of the students suffered a broken ankle in the right foot, another suffered dislocation of her shoulder blade, and the three others less serious injuries. (The official IRNA news agency – January 22, 2018)