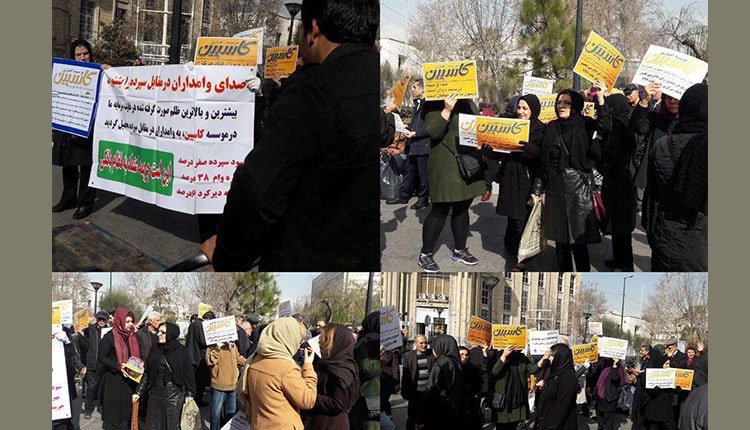 Tehran saw protests by various social strata in several parts of the capital on Sunday, January 27, 2019. Women play active role in these protests which included those of plundered clients of fraudulent financial institutes and law graduates.

Law graduates who had already held a protests outside the Lawyers Guild in Tehran on Saturday, January 26, continued their rally in the same place on Sunday, January 27, 2019, against reduced capacity of recruiting lawyers and their unemployment problem. The law graduates chanted slogans demanding an independent lawyers’ guild and increase in capacity of lawyers’ recruitment.

The defrauded clients of the IRGC-backed Caspian Institute gathered outside the Prosecutor’s Office in Tehran, demanding back their plundered assets.

Plundered clients of the Talay-e Samen Site also staged a protest on Sunday demanding an answer to their demands. They gathered outside the General Prosecutor’s Office in Tehran.

In continuation of the protests by various social strata, a group of clients who have registered their names and purchased cars from Kerman Khodro Company, gathered on Sunday, January 27, 2019, outside the Ministry of Industries, Mines and Trade in Tehran and rallied against the announced high prices, failure to deliver their cars and receiving no answers to their demands. The car buyers have held several protests so far demanding attention to their righteous demands.

Kerman Khodro clients have purchased their cars in April and June on fixed price by depositing 50 million tomans. But in November and December, when they were supposed to receive their cars, the company demanded another 30 million tomans while it was mentioned in the contract that it was not supposed to demand any more money and the price was fixed. (The state-run ISNA news agency – January 27, 2019)

Iranian women have participated in at least 896 protests by various social strata of people all across the country in the period spanning from March 2018 to late January 2019.