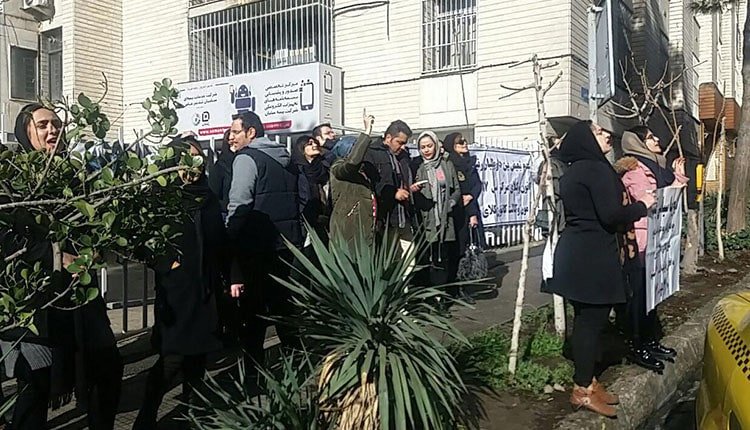 Presence Of Women In Protests Held By Various Social Strata At the same time, a number of law graduates held a protest rally once again in front of the Bar Association building in protest to the unemployment of jurists. They held up banners and chanted slogans. The law graduates have been protesting for three consecutive days.

The plundered customers of Bahman Motor gathered once again in Tehran on Tuesday, January 29, 2019. Not only did the defrauded vehicle buyers not receive a response from the company’s authorities, but the guards and government agents attempted to beat and attack the protesters.

A group of pre-school teachers in Bagh-e Malek protested in front of the governorate of Khuzestan against the lack of recruiting tuition teachers by the Ministry of Education.

Regarding the reason for the protest gathering, one of the teachers said, “We are teachers who started working in 2016 and have been teaching for free in public schools in Bagh-e Malek and the suburb villages for 3 years. Each month, we have been paying 405 thousand tomans for insurance rights and 150 thousand tomans for space rights in the hope of being recruited as a tuition teacher by the Ministry of Education. Two years ago, 140 preschool teachers from Bagh-e Malek were recruited by the Ministry of Education, while some of them did not even have one year of insurance payments or class attendance.”

In another event, a protest rally was held by the residents of Jalalabad village in Zarand, on Tuesday, January 29, 2019. They protested against the lack of recruiting in the city’s factories. The presence of women was significant in the protest rally as they carried a large banner declaring their protest and demands.

Woman hanged in Nowshahr is the 87th executed under Rouhani