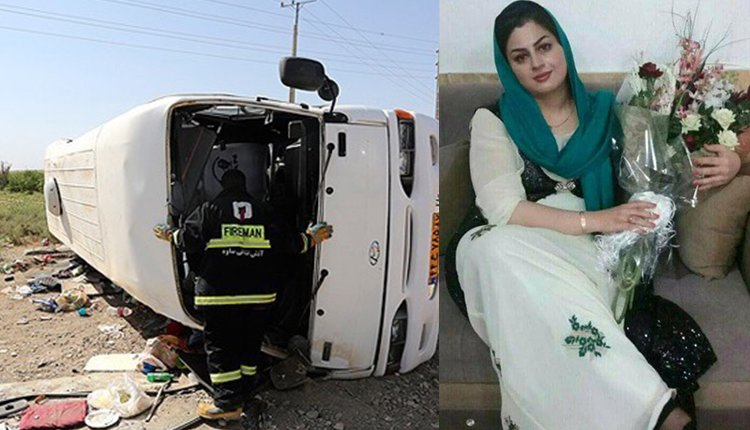 A female midwifery student from Bonab Azad University named Damon Moludpour, lost her life at the Tabriz Hospital on Tuesday, January 29, 2019, due to a minibus overturn.

Five of the female students were discharged from the hospital after treatment. A midwifery student, Damon Moludpour, underwent surgery at a hospital in Bonab, but unfortunately died in the hospital several hours later. (The state-run Mashregh News – January 29, 2019)

Students at the Bonab Azad University criticized government officials in a protest statement and wrote, “In the face of these terrible tragedies that have been repeatedly plaguing students across the country, we are only witnessing the lack of accountability of the authorities. Wherever the relevant authorities have met with the families, students, and protestors, they have tried to remove the issue in a variety of ways.

We, students, have repeatedly stated that our first and final demand is to inquire and prosecute the authorities. Those who are fully supported by the corrupt system are the main elements to such bitter incidents.”

Last month, an Azad University bus overturned and crashed on Tuesday, December 25, 2018, on the campus of the Sciences and Research University, killing 10 passengers, including three young women, and injuring at least 28. In another bitter event, due to the lack of safety and basic standards in the classrooms, on Wednesday, January 30, 2019, a fire broke out at the girls’ elementary school in Salas-e Babajani in Kermanshah Province and burned down the elementary school classrooms. Although reports have been repeatedly made to the Provincial Education Department officials about the inadequate and hazardous heating systems, there have not been any considerations so far.