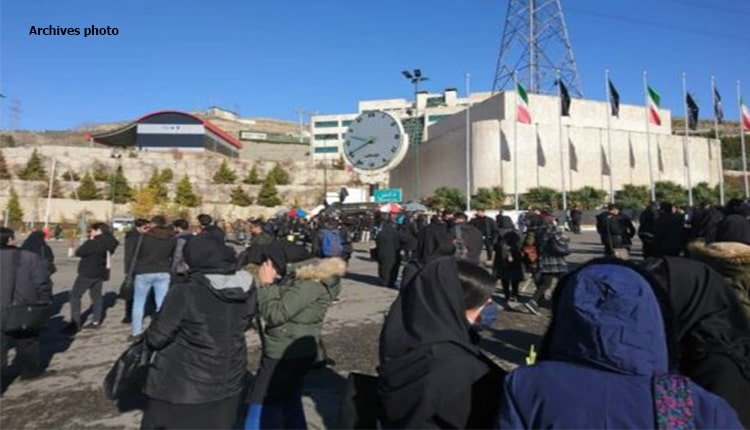 Teachers in the cities of Karun and Bavi, in Khuzestan Province, held a protest rally in front of the Khuzestan Department of Education building on Sunday, February 3, 2019.

They protested against the non-application of 25 percent of the right of war zones under Article 112 of plan six of the country’s five-year development law. According to the law, employees of areas that were involved in the war in Khuzestan during the Iran-Iraq war are entitled to the right of war zones.

With the separation of the two cities of Karun and Bavi from Ahvaz, these areas were not recognized as war-torn cities and were deprived of the war zone rights. There are 1,256 teachers in Bavi and 1,700 teachers in Karun.

These hardworking teachers in Khuzestan had also gathered in front of the Khuzestan Department of Education on Saturday, February 2, 2019.

In another development, a group of defrauded clients from Persian Pars Company also gathered on Sunday, February 3, 2019, in front of the Public Prosecutor’s Office in Tehran. Persian Pars is a car dealer company that has not responded to the demands of its customers. On Saturday, February 2, 2019, another group of buyers of registered cars from the Iran Khodro Company gathered in front of the Ministry of Industry, Mine and Trade in Tehran, and protested against the high prices of the vehicles and the lack of delivery of their cars.

Also on Saturday, February 3, 2019, students of the Azad University, Science and Research Branch in Tehran, gathered on the occasion of the 40th day of the death of their classmates in a fatal bus accident and held a ceremony at the university. They honored the memories of their classmates who died in this tragic incident.

On Tuesday, December 25, 2018, an accident on the campus of the Sciences and Research Branch of Azad University in Tehran, led to the deaths of eight students including four female students and two other passengers. The names of 3 female students were announced among the dead.