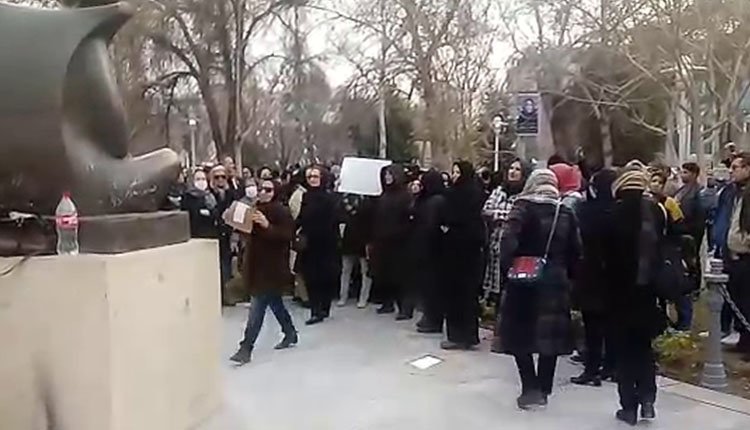 Teachers and educators held massive protest rallies in Isfahan and Qazvin on Thursday, February 7, 2019. Hundreds of people from other sectors joined and actively participated in this series of protests.

In Isfahan, teachers and educators protested against the regime’s policies, including the drying up of Zayanderud water. In this gathering, women played an active and significant role. Other strata of the people joined the massive protest rally to demand that the Zayanderud water be allowed to permanently flow into the river.

Teachers and educators, and women, in particular, had a very active presence in this gathering. The protesters chanted, “A nation has never seen such injustice”, and “Teachers would rather die than face dishonor”.

Security forces attacked the peaceful rally with tear gas and pepper spray to disperse the crowds. The protesters chanted “Don’t be afraid, we’re all together” and “We are teachers not criminals” in return.

On the same day, a group of teachers and educators in the Esfarvarin district of Qazvin Province gathered in front of the governorate building and protested against false promises of the housing cooperative and lack of accountability of the judiciary after twelve years. On Thursday, February 7, 2019, a group of defrauded clients cheated by Padideh Shandiz in Mashhad held a protest gathering in front of the office building of Ahmad Alamolhoda, Friday Prayer leader in Mashhad, in protest of non-fulfillment of their claims and the loss of their assets.

The Padideh Shandiz is an Iranian private joint-stock holding company affiliated with the IRGC, which lured investors by promising huge returns on their shares but has plundered their assets and has not redeemed the duped investors.

On Tuesday, February 5, 2019, a group of plundered clients of the Sekkey (coin) Talay-e Samen also gathered outside the General Prosecutor’s Office in Tehran and protested against the loss and plunder of their assets.