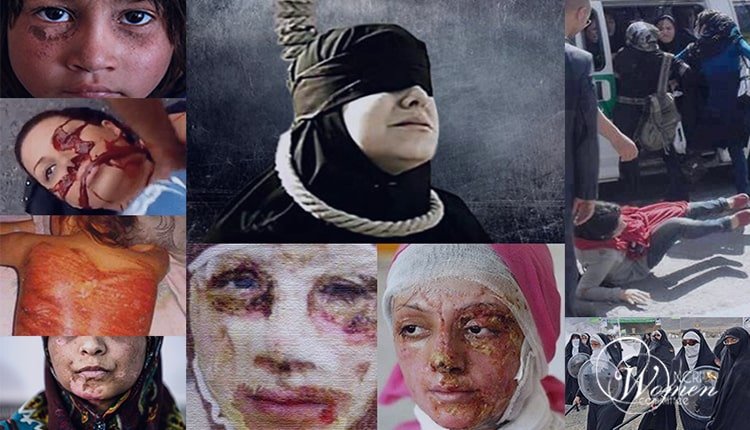 40 years of crimes against Iranian women

For 40 years, Islamic fundamentalism in Iran has placed enmity with women at the core of its crimes, intimidating the entire Iranian society through the repression of women. The 40 years of crimes against Iranian women under the mullahs’ rule were not a matter of expediency but of security and are totally ideological.

In the eyes of the Velayat-e Faqih, the “woman” is inadequate and marginal, and must be a submissive and obedient slave. The political and ideological evidence of this misogyny can be clearly seen in the letter that Khomeini wrote to the Shah on October 9, 1962, 16 years before the usurpation of sovereignty:

After sending salutations and prayers, as it is published in newspapers, the government has given women the right to vote. As your majesty is aware, the interests of the state are better served by preserving the religious teachings of Islam and calmness of the heart. I urge you to order it (women’s right to vote) to be eliminated from Government and Party programs in order to receive the praise of the Muslim nation.

Khomeini began violating his promises right from the beginning of his rule 40 years ago, by depriving women of their human rights.

On February 26, 1979, two weeks after the revolution, Khomeini’s office announced that it would abolish the Family Protection Law. The law provided women with limited privileges in family rights. The next day, on February 27, women’s social services were abolished and, three days later, on March 2, 1979, women judges were deprived of judging and engagement in the judiciary.

Khomeini believed that, “the equality of women and men is in fundamental violation of some of the most crucial rulings of Islam and in defiance of some of the explicit commandments of the Quran. The duty of believers towards such a thing has been determined by Islam.” (The state-run Ressalat daily newspaper – October 22, 1997)

Khomeini imposed his misogynistic ideology on women with the motto of “either the veil or a hit on the head.” This was the main focus of the subsequent repressive measures undertaken by successive governments of Rafsanjani, Khatami, Ahmadinejad and Rouhani during the regime’s 40 years of rule.

In May 2010, the parliament passed a law entitled, “The Law on the Extension of Options to Implement Chastity and Hijab,” and tasked 26 government institutions with the responsibility of cracking down on women.In the next stage, the recruitment of vice patrols opened the way for club-wielding forces to harass women on the streets. October 2014 saw the rampage of organized government-backed gangs attacking Iranian women by stabbing or splashing acid on them.

According to most women’s rights experts and advocates, Iran is the only country in the world where thousands of women have been executed or subjected to torture because of their political dissent.

In the 1980s, tens of thousands of PMOI women, including teenage girls, pregnant women and elderly mothers, were executed for exercising their right to freedom of expression. They comprise one third of the total number of victims of executions on political grounds in Iran.

The regime’s criminal practices and misogynistic policies have continued throughout the past 40 years.  In a statement issued in December 2018, the Women’s Committee of the National Council of Resistance of Iran, announced, “Only last year, nearly one thousand women were arrested and detained in prison for their involvement in anti-government protests.”

87 women have been executed since Rouhani took office.

The regime’s parliament has renamed the bill on the Elimination of Violence Against Women as Provision of Security for Women and has removed 40 of its 90 articles. But the bill has not been ratified yet, some 13 years after being proposed. The regime thus continues its misogynistic policies by postponing the bill under various pretexts.

Another example is the bill on increasing the age of marriage for girls, which has been stalled by the parliamentary Judiciary and Legal Commission under the pretext of it being “unnecessary.”

Violence against women and early marriages of girls in Iran have had drastic consequences in Iranian society including 24,000 divorces under the age of 18 and a growing number of women heads of household the majority of whom do not enjoy any government support. These in turn have led to numerous forms of social ailments and feminization of the face of poverty in Iran.

Iranian women, however, never remained silent over the past 40 years.

They joined the struggle against the mullahs’ religious tyranny in step with men. Today, they hold the leadership of the main opposition force to the mullahs’ regime, the People’s Mojahedin Organization of Iran (PMOI/MEK). With such role models, we can see Iranian women in the streets, participating in most protests against the regime, speaking out for their rights, and paying the price for freedom and turn the page of history in their homeland.