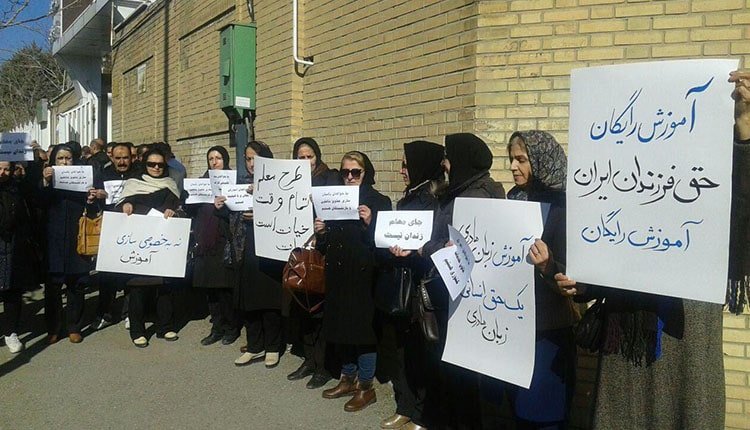 Iranian teachers and educators held their nationwide protests for the fourth time this year, on Thursday, February 14, 2019.

By the time of this report, the protests of Iranian teachers and educators has been held in Mashhad, Kermanshah, Urmia, Ardabil, Khorramabad, Sanandaj and Marivan.

Working and retired women teachers actively participated in this fourth round of nationwide protests, as they previously did.

Iranian teachers and educators demanded payment of their salaries, freedom of imprisoned teachers and free education for all children, among others. The gatherings of Iranian teachers and educators in Mashhad, Urmia and Marivan were also held outside the Department of Education in these cities.

A number of teachers and educators were arrested in Urmia, as the gathering was held despite massive presence of security forces who feared spread of the protests. The number of troops sent to disperse and suppress the protest were more than the participants, an eyewitness said.

Iranian teachers and educators had held nationwide protests, strikes and sit-ins on three previous occasions in the months of May, October and November. The October strike was held in more than 60 cities in 26 provinces.

Iranian teachers and educators have held at least 280 protests over the past year which is at least three folds greater than the 88 protests held throughout the previous year.

40 years of crimes against Iranian women